A Native American Love Story; by T.J. Young, aka Sgwaayaans 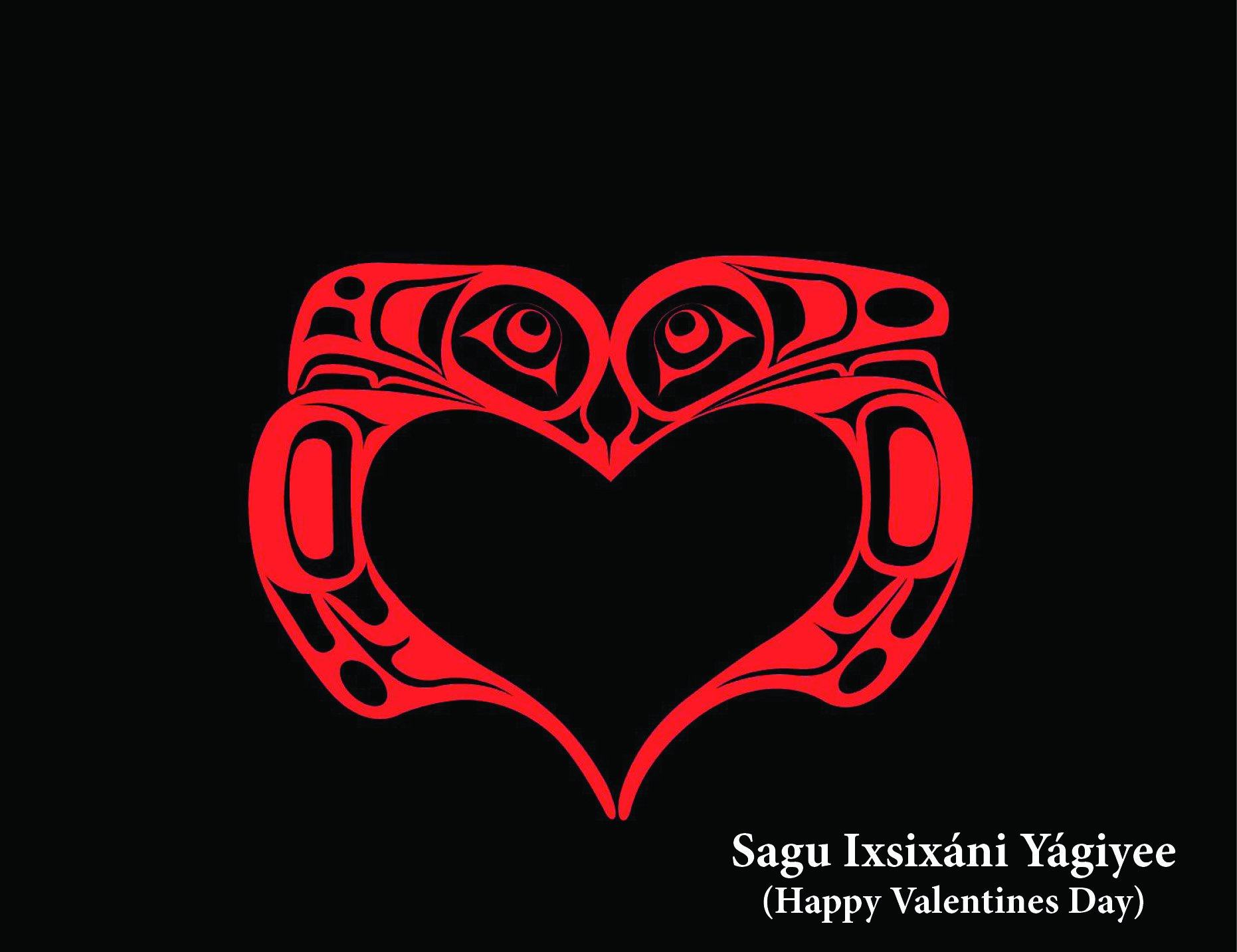 Storytelling has long been a way to chronicle history. For Native Americans, it remains a tradition that echos like a heartbeat. But, there are many ways to tell stories of Tribal folklore.

T.J.Young, aka, Sgwaayaans, is a member of the Yaadaas Eagle Clan. He’s drawn to tell tales of his Tribe~artfully.  Honoring his ancestors from Hydaburg, Alaska ,Sgwaayaans has a knack for super-sizing legends to landmark the customs of his Kaigani, Haida Tribal Nation. 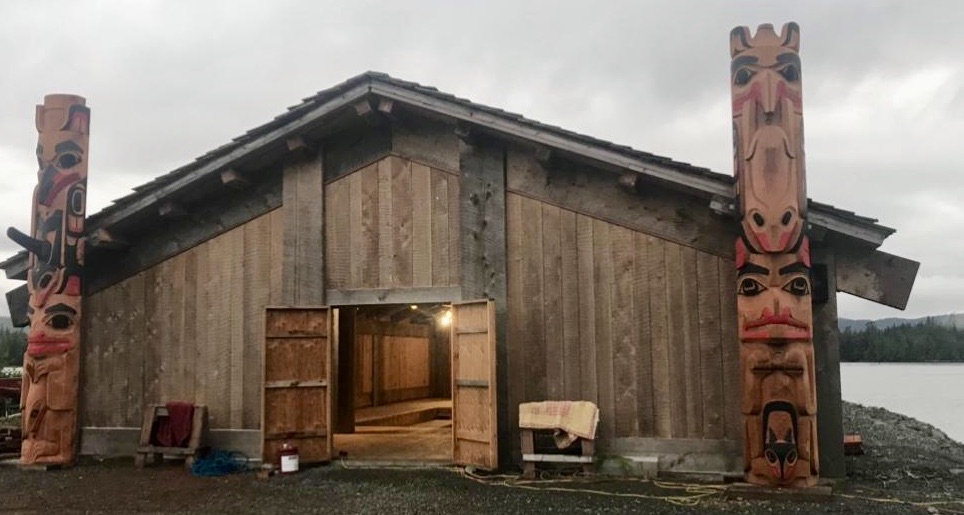 Creations of the near forty-year old are both sentimental and monumental. T.J. credits his grandfather, Claude Morrison for inspiring his love of woodworking, a traditional activity of the Haidas. After mastering the elder’s art of carving a small halibut hook, Sgwaayaans was ‘hooked’ on carving. Soon, the young craftsman began translating ancestral lore into elaborate ceremonial masks and massive totem poles.  Chiseling indigenous alder and cedar trees into images of animals and supernatural-beings, Sgwaayaans’ novel designs transformed timber into tale. 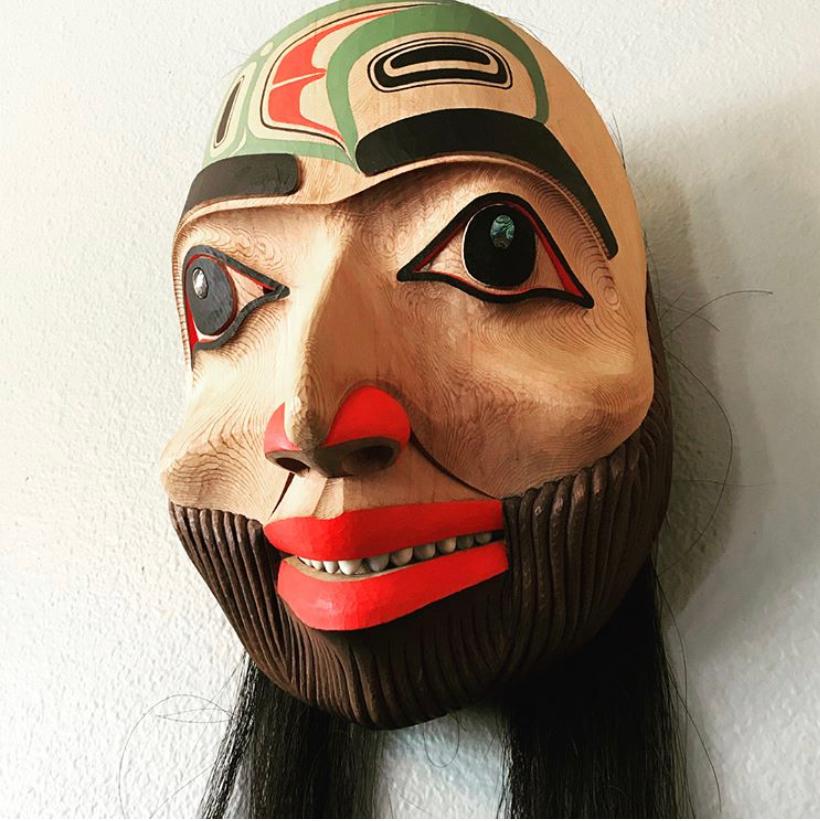 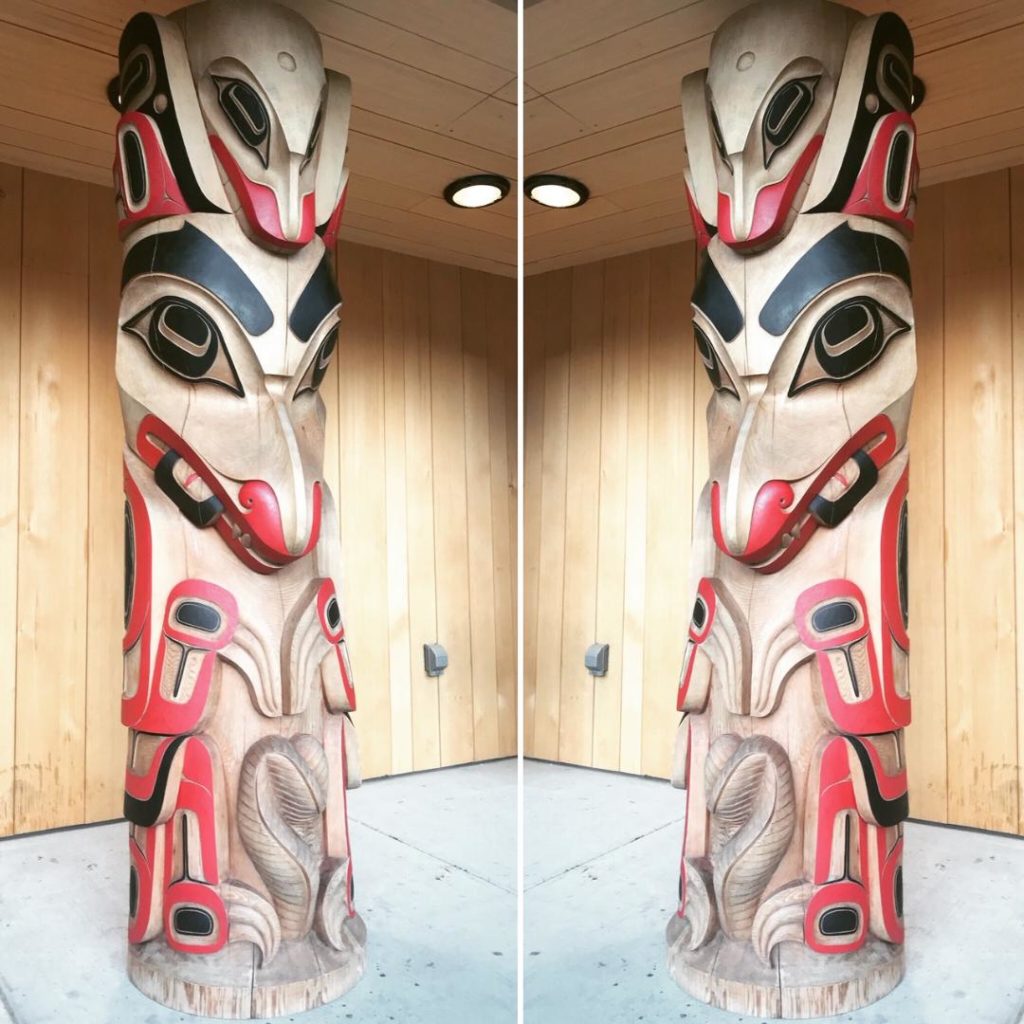 Tracing the myological footsteps of his Eagle Clan members, Sgwaayaans is not only a student of Haida folklore but a wise teacher of it’s proud traditions. “In order for us to progress as a Nation in the 21st century” he says “Native American artists must master traditional techniques prior to developing a more contemporary style .” Working with his brother Joe, Sgwaayaans says the two regularly bounce around ideas that help navigate the artistic spaces between historic and hip story-telling. 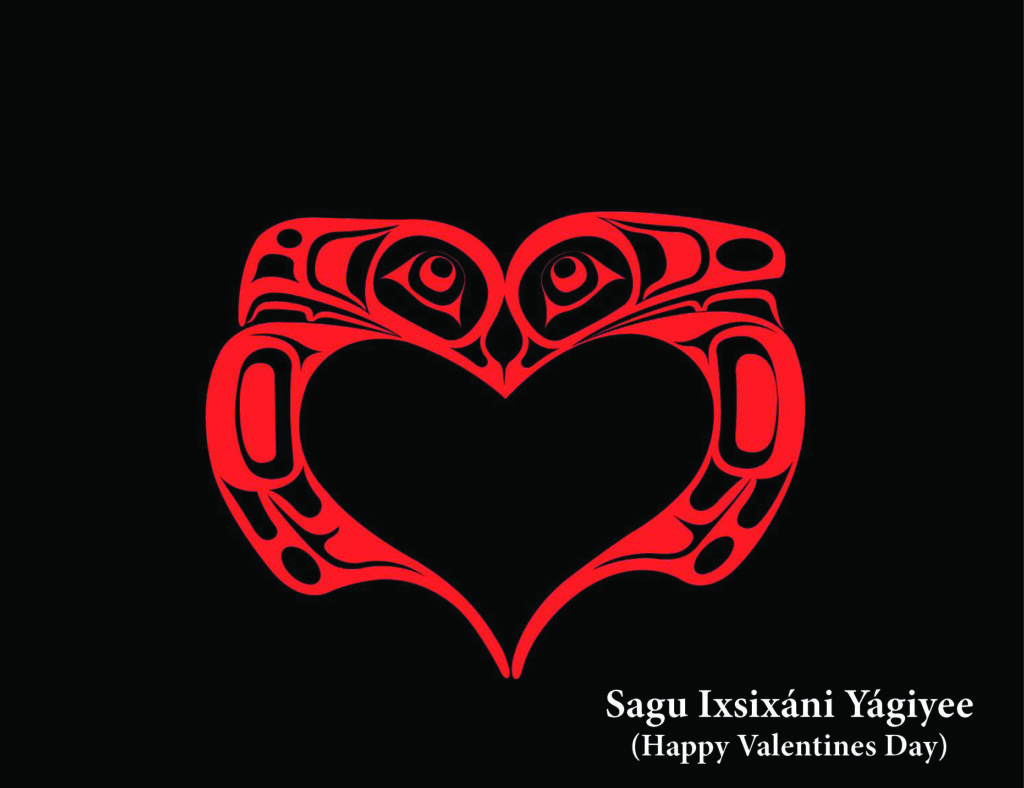 This graphic heart echos the story of traditional Haida marriage.The image signifies the union between Eagle and Raven Clan members. According to Tribal rules, a child is born into the Clan of the mother’s lineage and is expected to marry someone from the opposite tribe.

Haida mythology describes members of the Eagle Clan as those who use good judgment to function well in human society. They’re thought to be powerful, strong, spiritual and wise.  In contrast, members of the Raven Clan are seen as creative forces who can be mischief makers. Their intangible super-human nature helps to navigate the spaces between the mundane and exotic, between this life and the life beyond.  The bond between opposite Clan characteristics is designed to balance marriages.

It’s not the tradition of Native American’s to celebrate Valentines Day. However, members of Haida Tribal Nation love the artful gift of story-telling and echoing their timeless love of Native American culture.   Sgwaayaans wishes you a Sagu Ixsixáni Yágiyee! 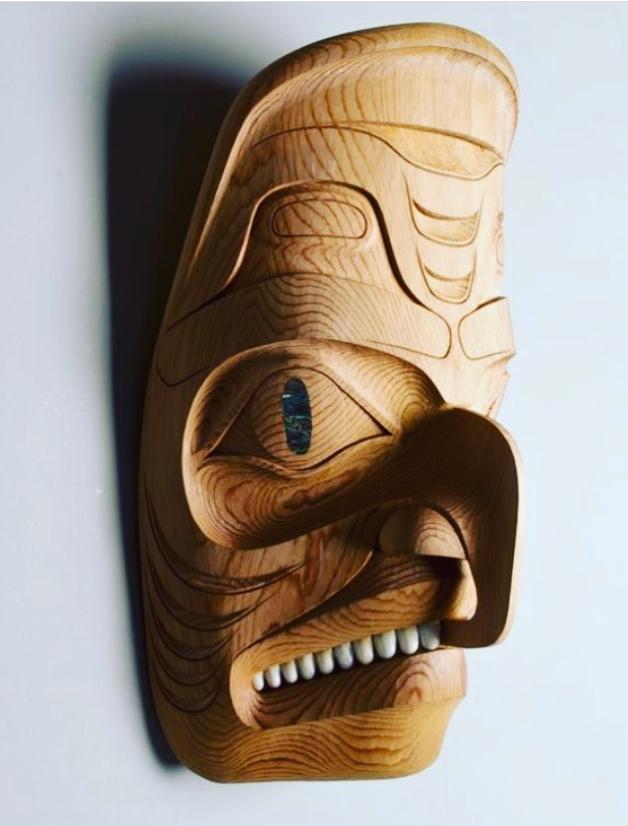 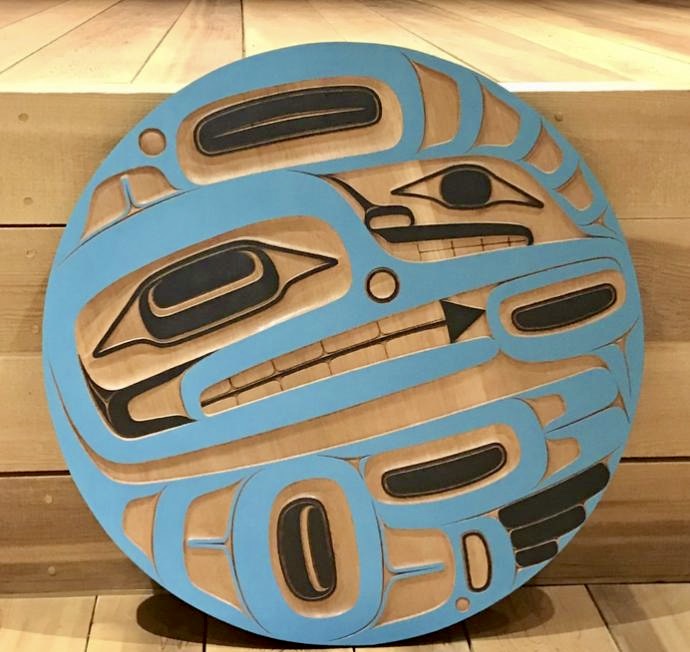 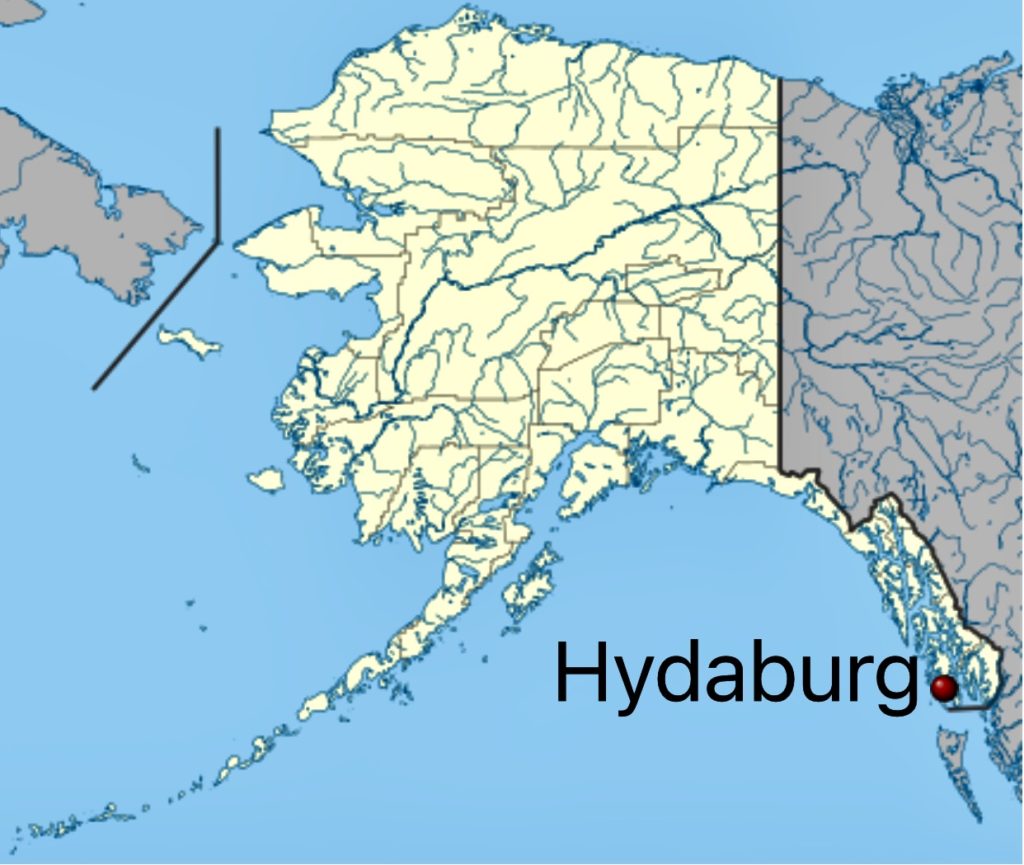