Diane Arbus at Endicott College : Is This Exhibit Art or Obscenity? 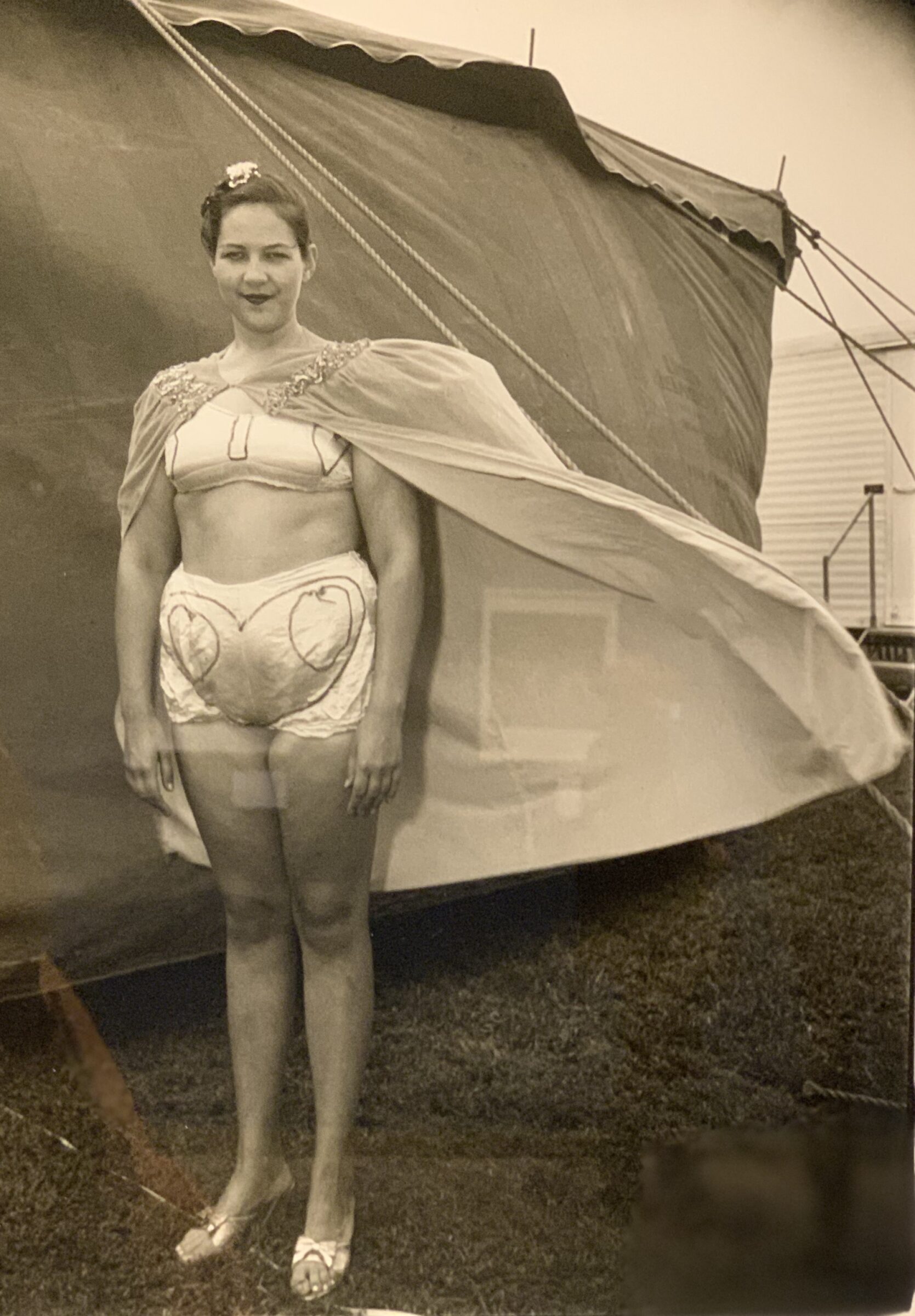 The work of Diane Arbus is controversial. Some see her photography as a landmark of artistic expression, others find her contributions to be obscene. It’s a matter of perspective. 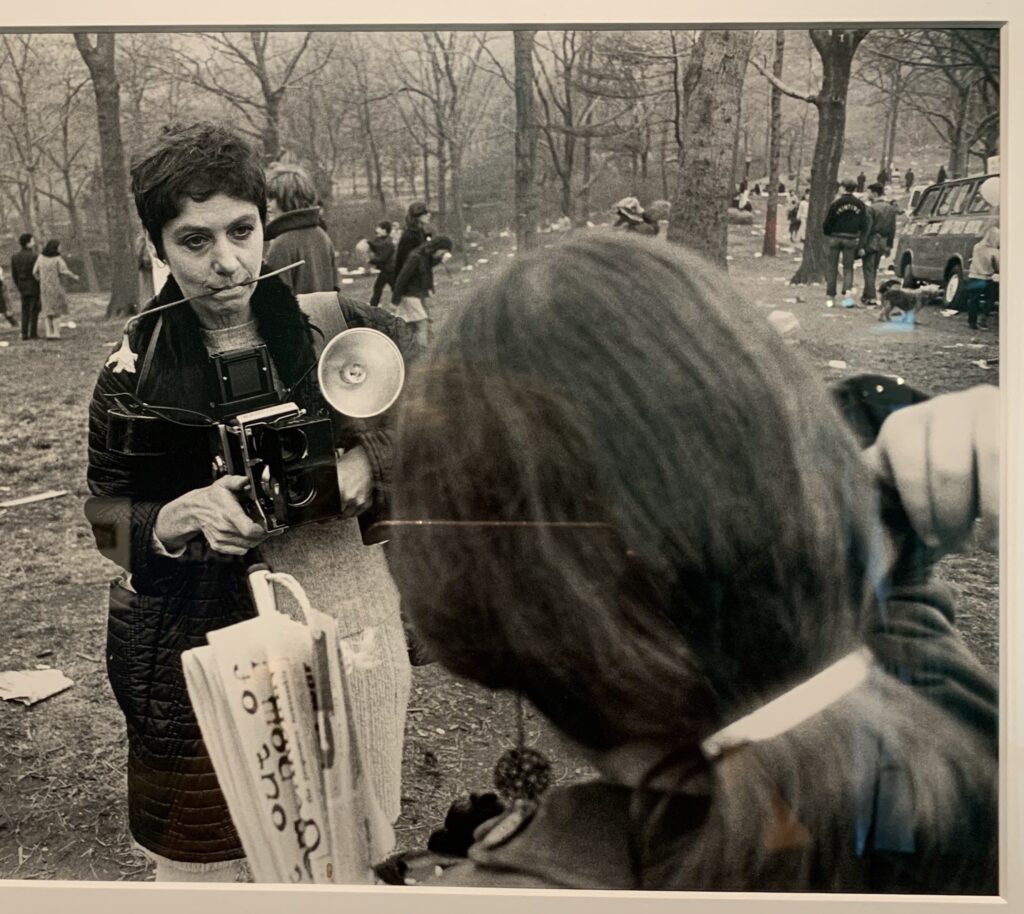 Before her suicide in 1971, Arbus was somewhat of an eccentric living the life of a poor-little-rich-girl, gone totally BoHo. After her death, she was broadly appreciated as a visionary and one of the most influential artists of the 20th century.

Unafraid to capture the lives of freaks, nudists, and strippers, all comfortable sharing their lives free of uniformity, Diane’s work was intellectually pivotal for it’s whole-hearted investigation of individuality. The psychological monumentality of this graphic thesis is timeless.

As David Haberstich, Curator of Photography, Archives Center of the Smithsonian National Museum of American History explained to a gathering at Endicott College’s Walter J. Manninen Center for the Arts, Arbus’ camera was her means of exploring social norms with compassion and without judgement.  She captured the limitless permutations of personal happiness, fixing agency to marginalized people living, what for them, were idyllic lives. 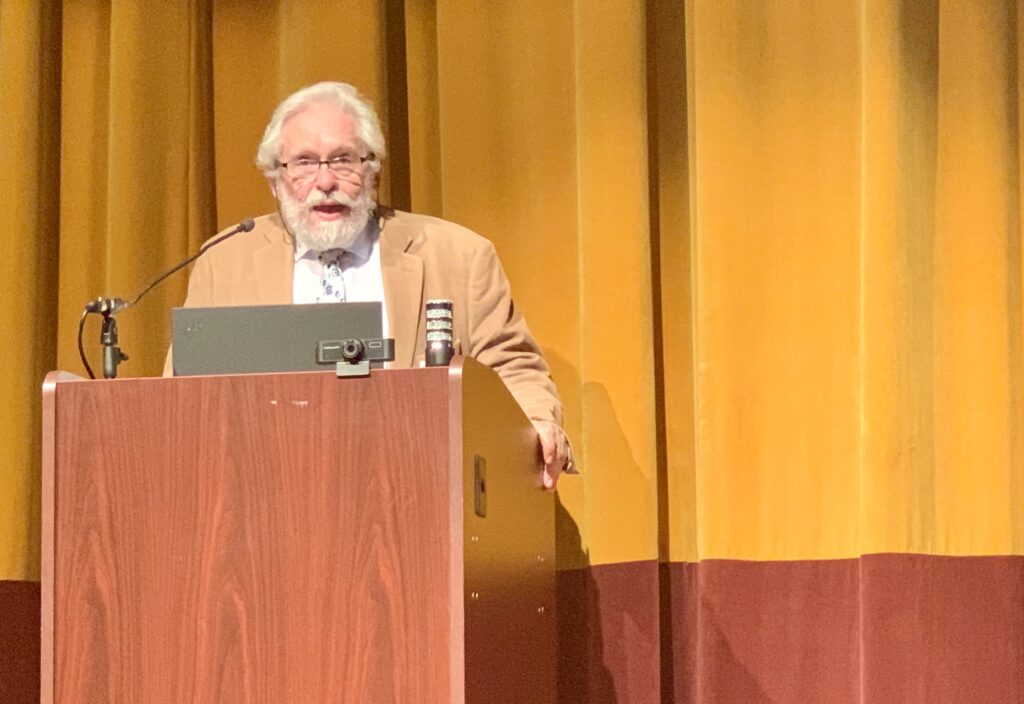 Even though “her work wasn’t necessarily a crowd pleaser” Haberstich recognized the value of Arbus’ respect for pervasive strangeness.  He explained how as young curator, he saw Arbus’ work as “scholarship, a documentation of the Family of Man”. “Her attention to detail was unfailing and her theme important.”  In 1960 Haberstich purchased five of her prints for $25.00.

A closer look mirrors images of dystopia. With dead eyes, the twins stare back at the viewer.  One sister forces a smirk, the other is stone-faced. Outwardly, their uniform presentation is of compatibility, however, their facial expressions suggest a dark, inner quest for autonomy.  So culturally relevant is the underlying theme of this iconic image, it’s often recreated in pop-culture. Stanley Kubrick’s horror film ‘The Shining’ references the image multiple times as does an episode of the television series “Psych: The Old and The Restless” . Catching a peek of ‘Identical Twins’ is reason enough to see this exhibit at Endicott. 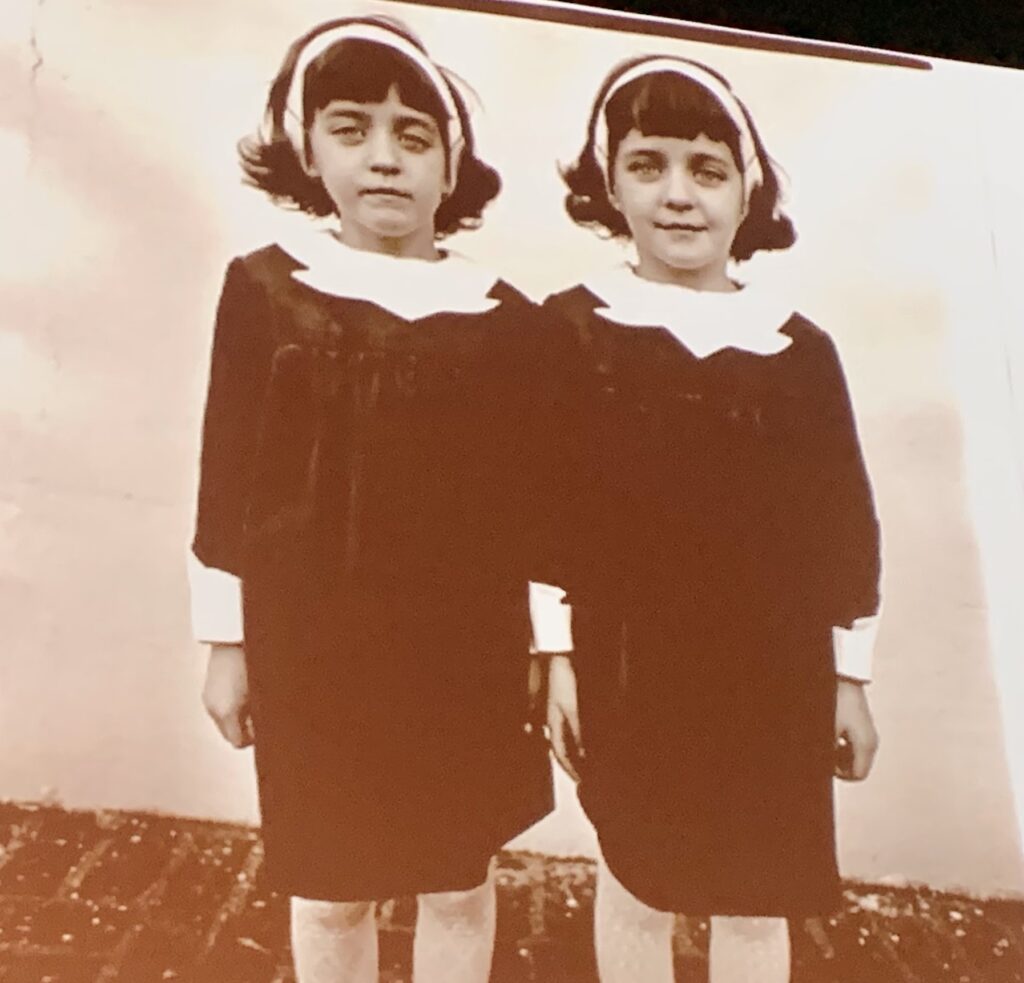 The remainder of this article includes nude images. None of the subjects were photographed without consent. By intention the content appears voyeuristic. However, to affirm human-connectivity and remove any psychological barriers of inhibition, Arbus was  nude while photographing these people.

In a celebration of happy self-expression the focus of Arbus’ lens embraced those who felt un-seen or deviant.    Look away if this isn’t for you. But, before you do, consider the value of living life free of conformity and judgement. 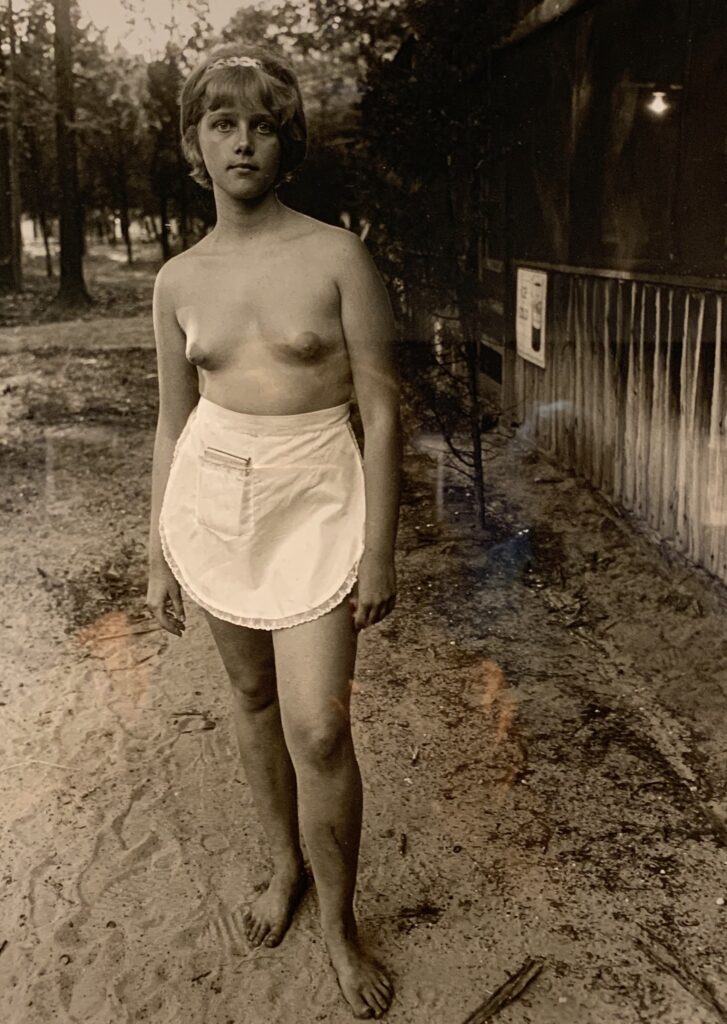 Diane Arbus: Waitress at a Nudist Camp in New Jersey, 1963 ( Endicott College exhibit) on loan from the MET /NYC 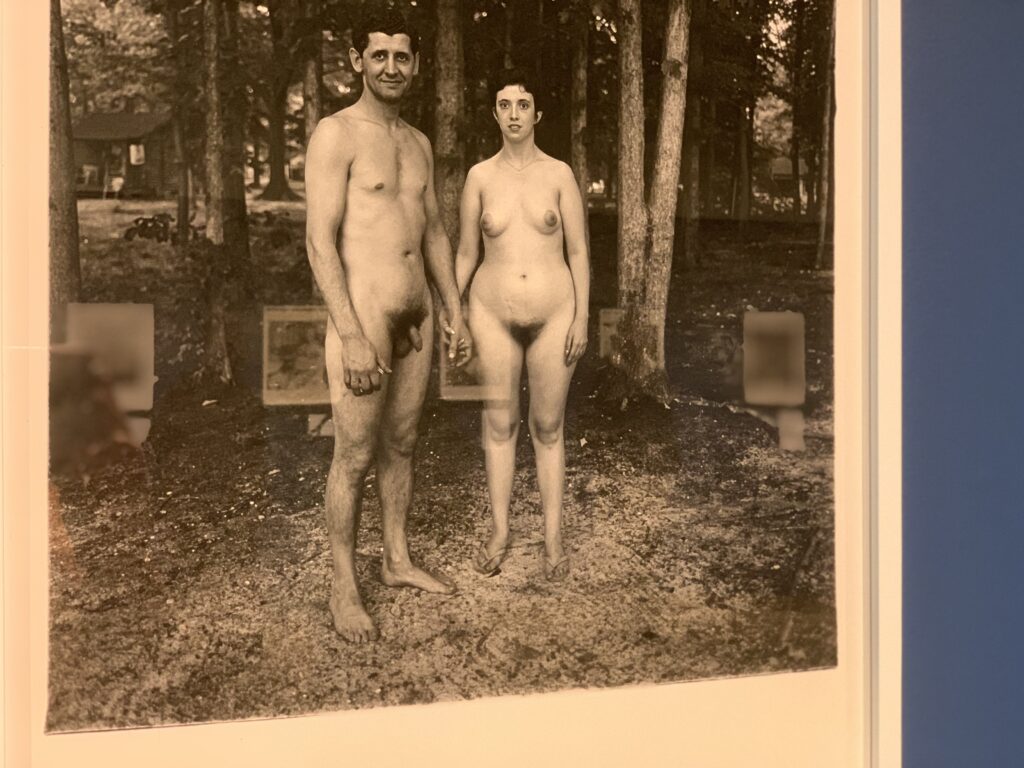 Diane Arbus: “A Husband and Wife in the Woods at Nudist Camp in New jersey 1963” Arbus’ study of nudists echoing Adam and Eve pre-expulsion from Eden. (Endicott College exhibit ) on loan from National Galleries Scotland 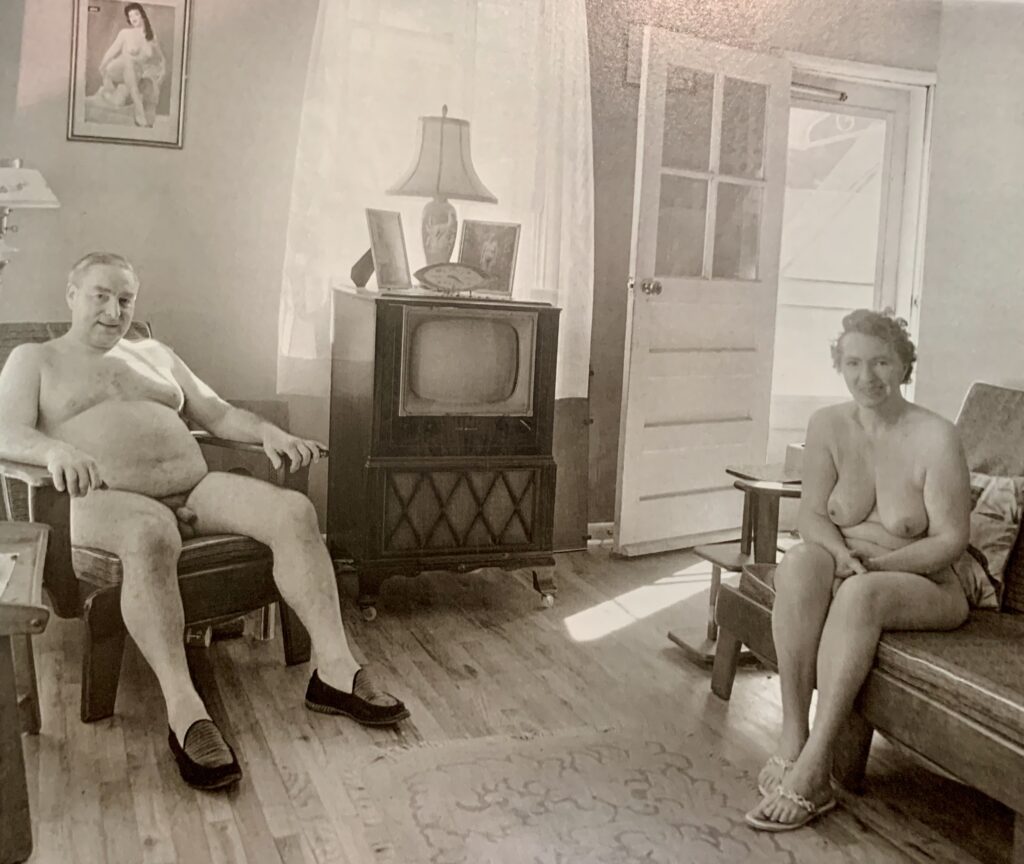 Diane Arbus: “A Retired Man and His Wife at Home in a Nudist Camp” 1963 ( Endicott College exhibit ) on loan from the MET/NYC

Self-exiled from the ultra-fashionable phoniness of her childhood, Arbus’ life as an adult drew her into concentric circles of artists working on the cutting edge of their genre.  Richard Avedon, Gloria Vanderbilt, and Andy Warhol were a few of her contemporaries. The collective courted financing from well-to-do’s for sustenance, yet the exotic-expressionists frequently resented commodification of their works. Survival was, for them, a matter of perspective.

Arbus’ photos prompt a serious dialogue of values. Her lens may appear to dwell on the risqué but it’s intention was to capture exiled souls in an Eden of their own perspective. 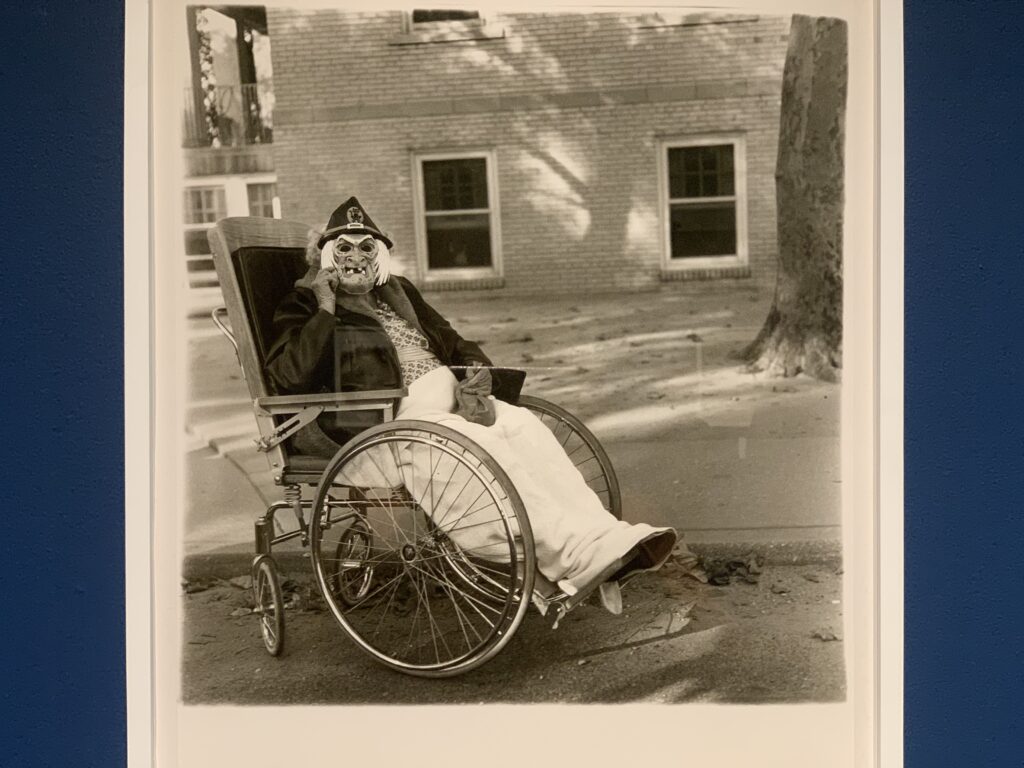 Diane Arbus: Masked Woman in a Wheel Chair. 1970 ( part of Endicott College Exhibit) on loan from the Whitney Museum, NYC