The Edward M. Kennedy Institute Hosts ‘The Senate Project’ and a Lesson in Civility With Senators Graham and Sanders 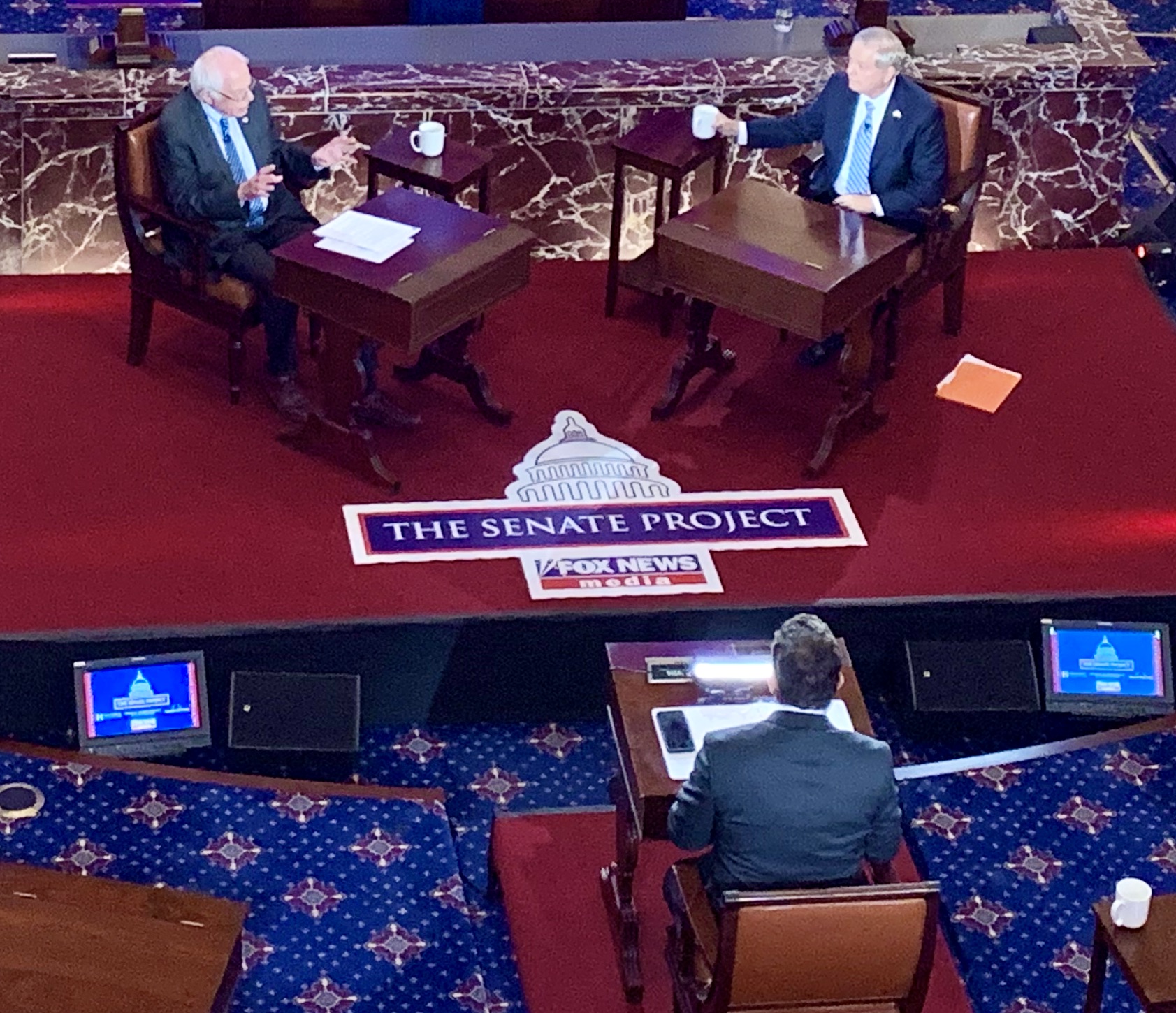 Bret Baier, of FOX News, moderated a debate at the Edward M. Kennedy Institute in Boston between Republican Senator Lindsey Graham of South Carolina and Independent Senator Bernie Sanders of Vermont. Intended to rekindle a tradition of civilized discourse and collegiality during times of political animus, this Oxford-style debate was the first presentation in a series called  “The Senate Project”. 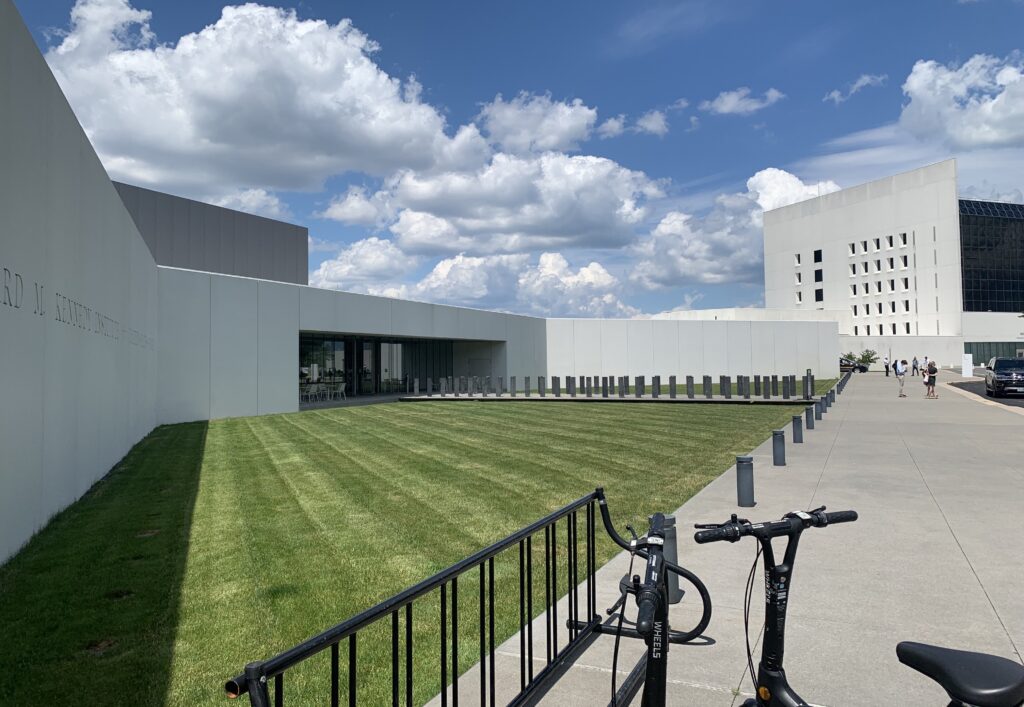 From doors to the left and right of the central  podium, Senators Graham and Sanders simultaneously walked into an exact replica of the Senate Chamber.  Applause from invited, bipartisan guests echoed the tenor of the hour.

Symbolic of equal sides of American political currency, the debate began, fittingly, with the toss of a coin. The ceremonial honor to ‘make-the-call’ belonged to Senator Sanders. He opted to begin what developed into a robust debate of substantive differences on the American political zeitgeist. His positions were clear and delivered with passion. Senator Sanders sees billionaires as oligarchs who monopolize power. He proposes extending health-care and education to all, fighting racism with more minority police officers, and addressing climate change with an immediate windfall-profits-tax on oil companies “to end the rip-off they’re imposing on consumers.” 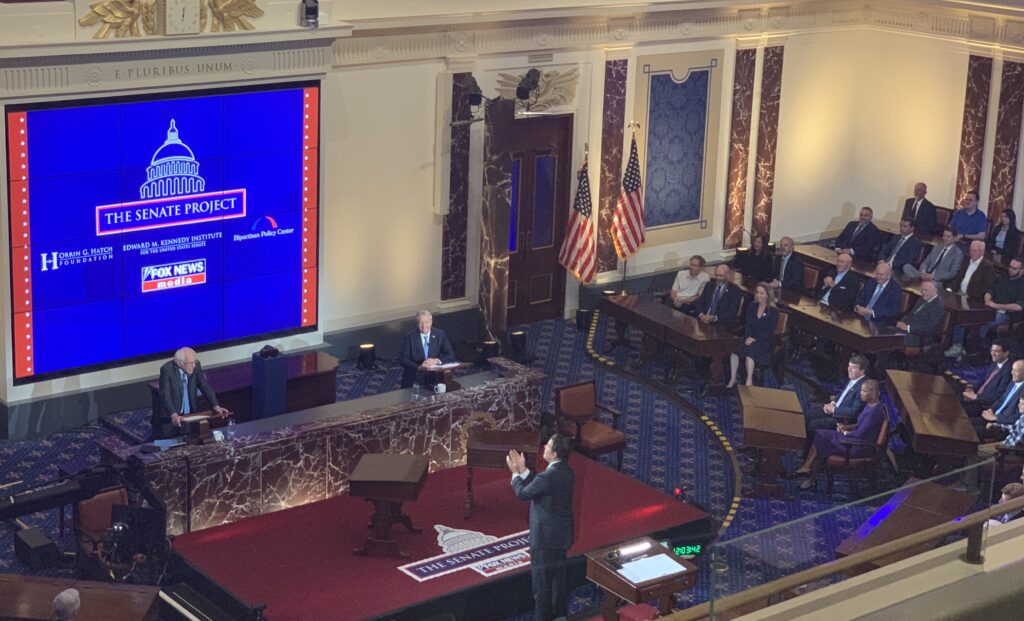 Senator Graham’s rebuttal was equally well delivered. He believes the oil crisis is the result of terminating policies that established American energy independence in favor of premature adoption of unreliable climate-change initiatives.  He suggests the use of  an ‘all-of-the-above’ approach to addressing the urgent energy needs of America. He believes medicare for all would fail, as most government agencies are inefficient bureaucratic machines.Throughout his remarks, Senator Graham revisited the boarder-crisis saying “without effective boarder policies we are opening the Country up to brutality as lethal as the 9/11 attacks at New York’s World Trade Center, and the Boston Marathon bombings.”

He then challenged Senator Sanders to bring his proposals to a floor-vote to quantify how popular Socialist ideas are with the American public.

After each Senator outlined his view of America’s political landscape the men left their lecterns and sat down to face the moderator.  Senator Sanders continued forcefully, blaming the war in Ukraine for escalating the price of goods around the world and reiterated a need to end oil company buy-backs that line-the-pockets of the rich. Insistent that a windfall-profit-tax would aid those most in need of relief from Putin price hikes, he labeled other inequities as consequences of greedy corporate robber-barons, such as those who run BlackRock, Vanguard and State Street Bank, as well as Insurance company executives, who cater exclusively to wealthy lobbyists.

Senator Graham’s counter was to say the ideals of Socialism have never worked. While Americans are sympathetic and generous people, they simply can’t fund the world’s woes. He believes incentivizing innovation and renewing American traditions to be the keys to economic prosperity and reestablishing a moral compass for the Nation. 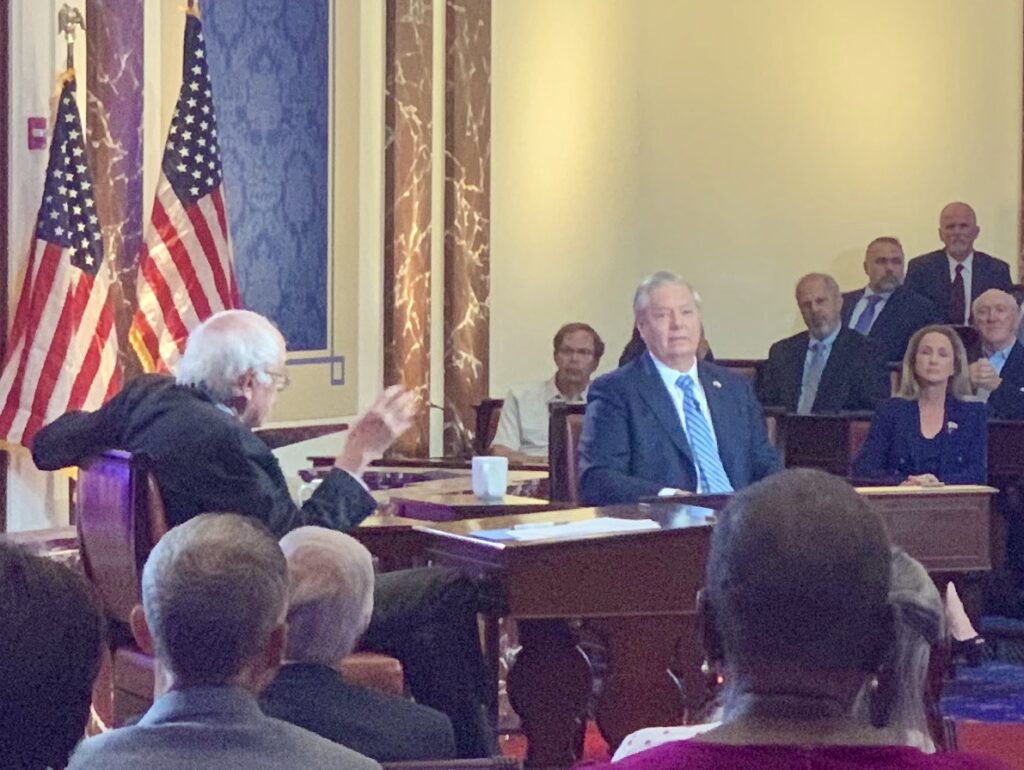 Edward M. Kennedy had represented the citizens of the Commonwealth of Massachusetts in the Senate from 1962 -2009. His Boston accent was as distinct on the Senate floor as was his willingness to seek common-ground with colleagues across the aisle. Similar to the collaborative tradition of Republican, President Ronald Reagan and Democrat, Speaker of the House Tip O’Neil, Ted Kennedy’s legacy is embodied by the mission of ‘The Senate Project'” seeking to find a way to work for the ‘common-wealth’ of the Nation.

Bret Baier called upon their collective cordial spirits when asking Senators Graham and Sanders if they too, could find a topic with the potential for legislative agreement. Without making promises on an un-written bill, both Graham and Sanders conceded gun-control may be a legislative space for bi-partisan support.   They agreed the laws we have presently don’t work as gun-violence defines the streets of urban areas as well as class-rooms filled with innocence. They propose to look at enhancing background checks, increasing age permits, screening for mental illness, adding police funding and banning assault weapons.

Senator Sanders concluded his remarks by saying “The majority of Americans hate powerful leaders who, as authoritarians, are out-of-touch with a system that should but doesn’t serve all-the-people. Senator Graham’s conclusion reminded people if they’re not satisfied with how things are going now to replace the people who currently hold office by voting them out in November 2022 and November 2024.

Agreeing to disagree without being disagreeable the Senators made a quick exit, leaving debate attendees to consider the greater lessons of civil discourse and the privileges of participating in this uniquely American political process. 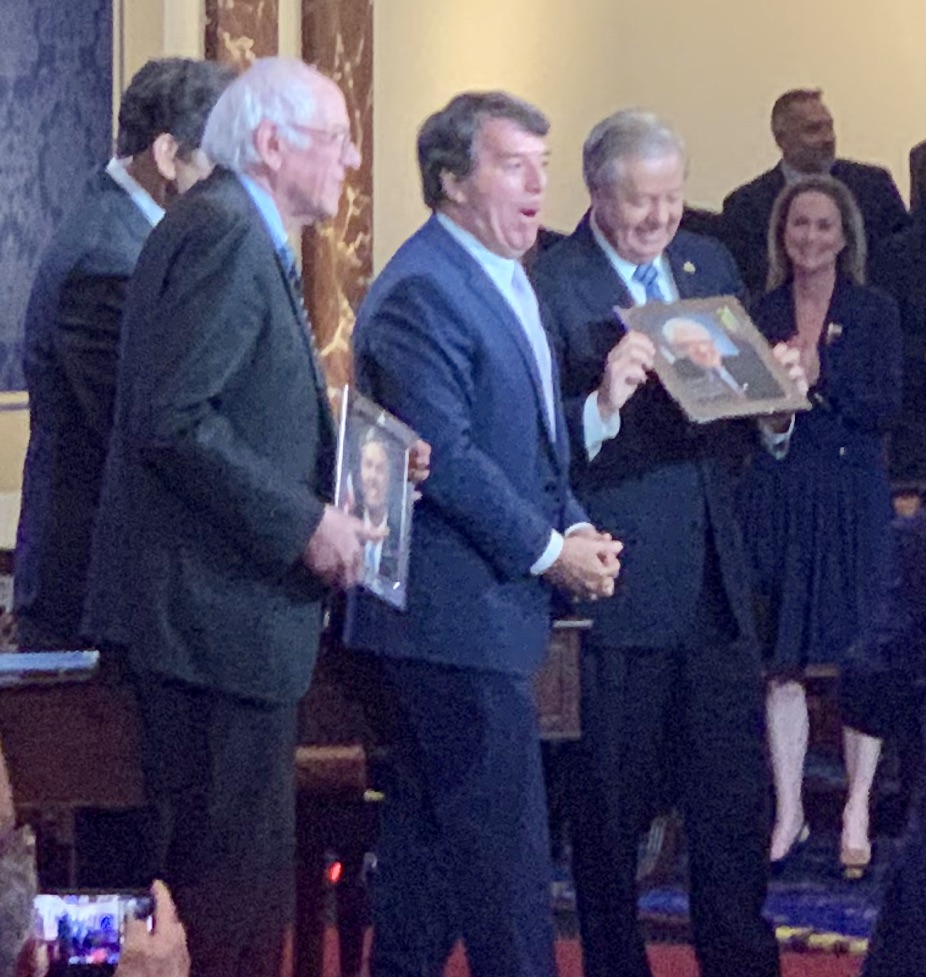 Bruce A. Percelay, Chairman and Founder of The Mount Vernon Company and Edward M. Kennedy Board of Directors gifts the Senators with publicity photos of their debate opponent. 6/13/2022 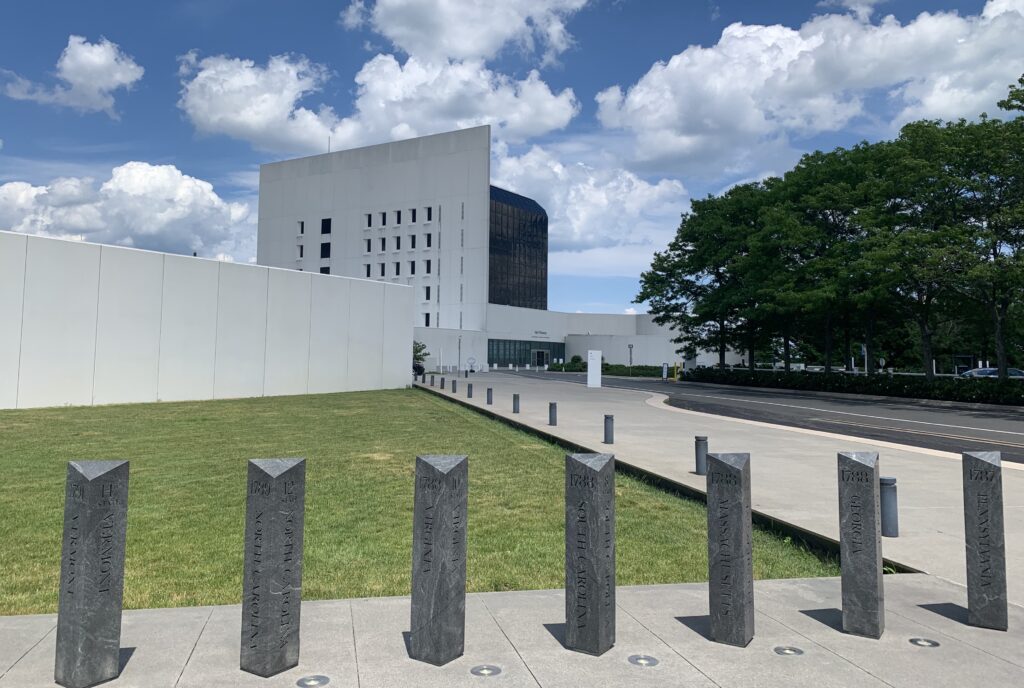 Granite columns engraved with the name of each state line the entrance to the Edward M. Kennedy Institute adjacent to the John F. Kennedy Library and Museum

The Edward M. Kennedy Institute, was designed by architect Rafael Viñoly to be a dynamic hub of social engagement. The centerpiece of the building is the full-scale replica of the United States Senate Chamber