“For Such A Time Such As This”~Kayleigh McEnany 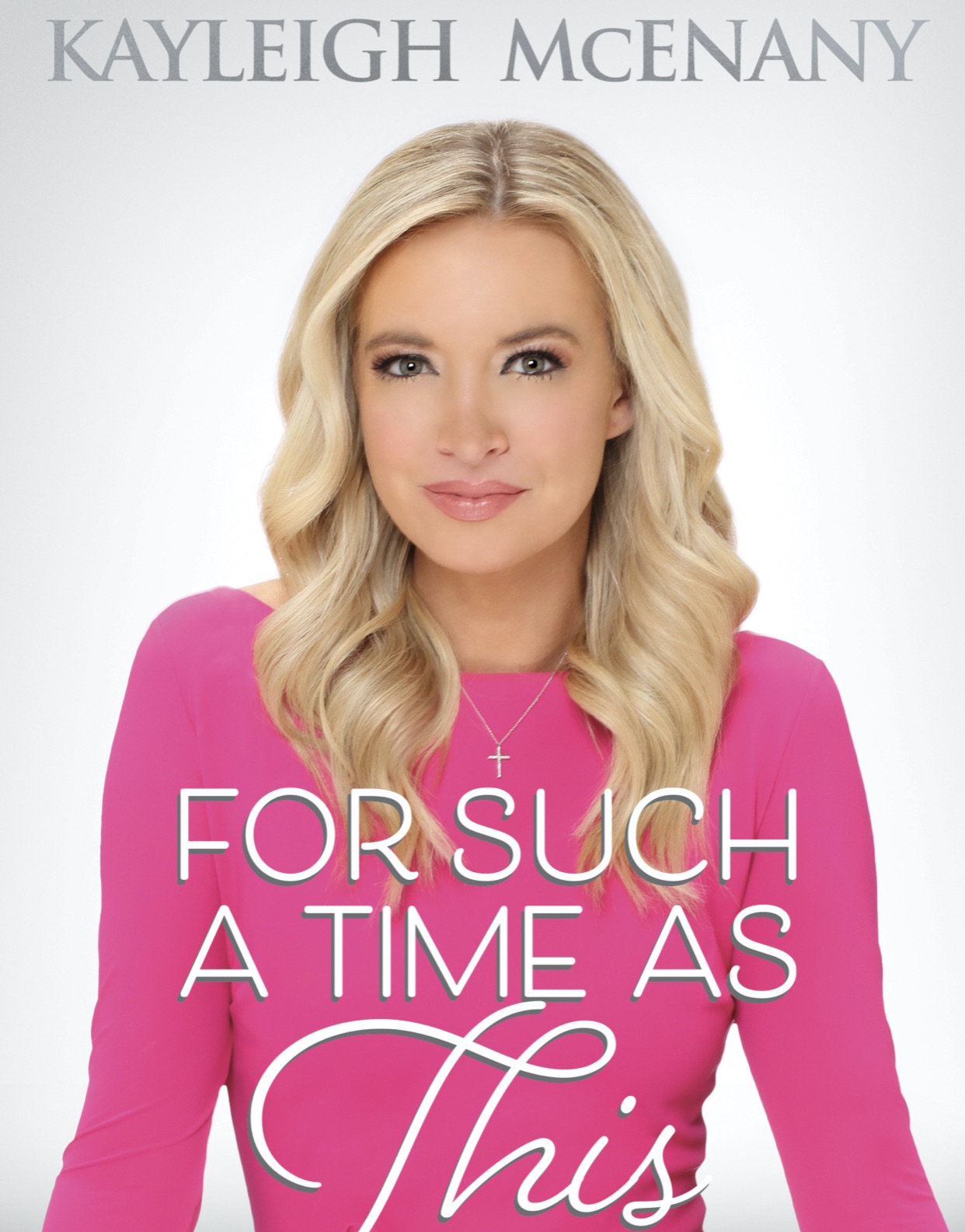 “For Such a Time as This” written by Kayleigh McEnany traces an unlikely path from life as a flip-flopping, Floridian cheerleader to a stiletto’d, White House press secretary. It’s a fun read, an insightful read and surprisingly, a ‘must read’. To the author’s credit the book is free of acrimony or ‘shoulda,~coulda~ woulda’s‘ so often found in partisan postmortems. It is instead, a personal affirmation of faith and humanity that may just save a life.

Twelve of the thirteen chapters in “For Such A Time As This”  juxtapose Kayleigh’s ambitions, family and faith with some fun behind-the-scenes peeks at life on the campaign trail. Kayleigh shares wacky-wardrobe mishaps at work, the joys of dancing to the YMCA song at overflow campaign rallies, and the reassuring comfort of home-baked goodies wrapped in prayers from Debbie Meadows, the wife of President Trump’s White House Chief of Staff, Mark Meadows. 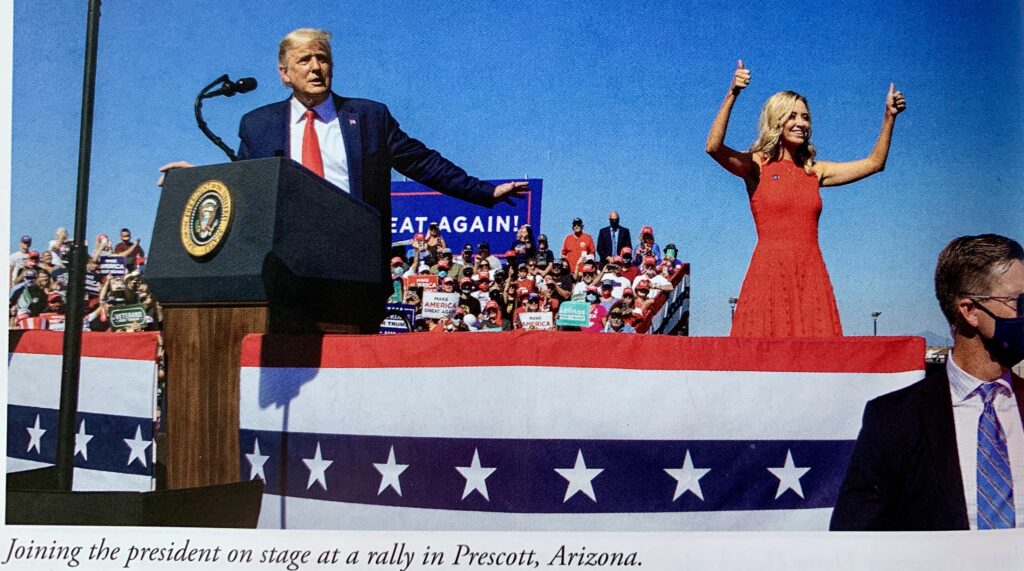 “For Such A Time As This” by Kayleigh McEnany published by Post Hill Press President Donald J.Trump and Kayleigh ( screen grab)

This book is a collection of positive ’cause and effect’ stories that highlight the myriad benefits of being prepared. Kayleigh, a self-described nerd, is a detail-driven, data-collector, determined to anticipate tough situations and have viable solutions ready for challenges. She credits the intellectual fire-power of professors and classmates at Oxford University and Harvard Law School for sharpening her skill-sets. Committed to an ‘Offense Only’ approach to attacks on her personal or professional compass McEnany confronts adversaries with an arsenal of facts to combat conjecture or deceit. “For Such A Time As This” is a first-person recollection of history, which in some cases, differs from transcriptions recorded elsewhere. Censored frequently by social-media platforms, Kayleigh’s unique vantage point offers credible contrast to third-hand agenda-derivative reporting.

Throughout the 209 pages of  this book the text weaves together Bible verses and dynamic principles of character applied to everyday life.  The final chapter, ‘A Parallel Journey’ holds an unexpected plot twist. Page 197 begins the intensely personal chronicle of this young woman’s decision to opt for preventative double mastectomy surgery. The intimate details have nothing to do with politics, they confirm common bonds of humanity, making Kayleigh’s experiences insightful.

After alarming news about her genetic predisposition to develop breast cancer, Kayleigh spent a decade continuing her education, working, dating, getting married and worrying each anxiety-inducing mammogram would reveal bad news. Fearing the eventual verdict the young lawyer ended her trail of worry. In “For Such A Time As This” she acknowledges the courage of Angelina Jolie, her mom and many others who chose to be pro-active with their health care and for showing her how to take an “Offense Only” approach to breast cancer.

To this day Kayleigh says women approach her to share how much sharing her story has meant to them. Some have the BRCA 2 gene, some have cancer, some are recovering from surgery, every story is personal. The statistics are **”one in eight women will be diagnosed with breast cancer in their lifetimes”.  McEnany’s intention in “Parallel Journey” is to affirm  “As women, we fight this fight together.”

“For Such A Time As This” is a fun read, an insightful read and surprisingly a “must read “~ because the last chapter may just may save a life.” 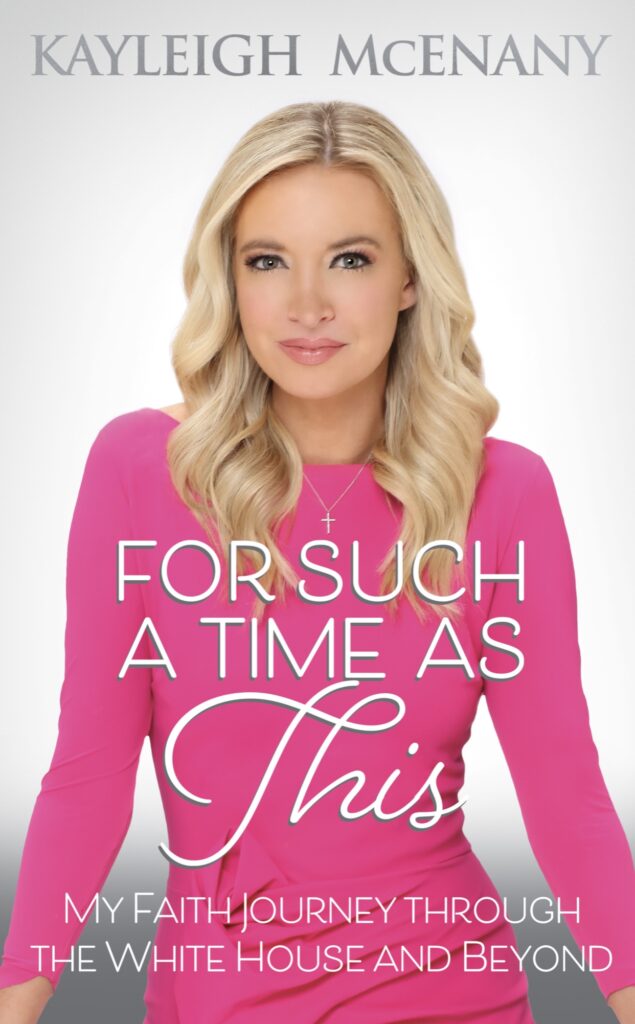 “For Such A Time As This” by Kayleigh McEnany: courtesy Post Hill Press