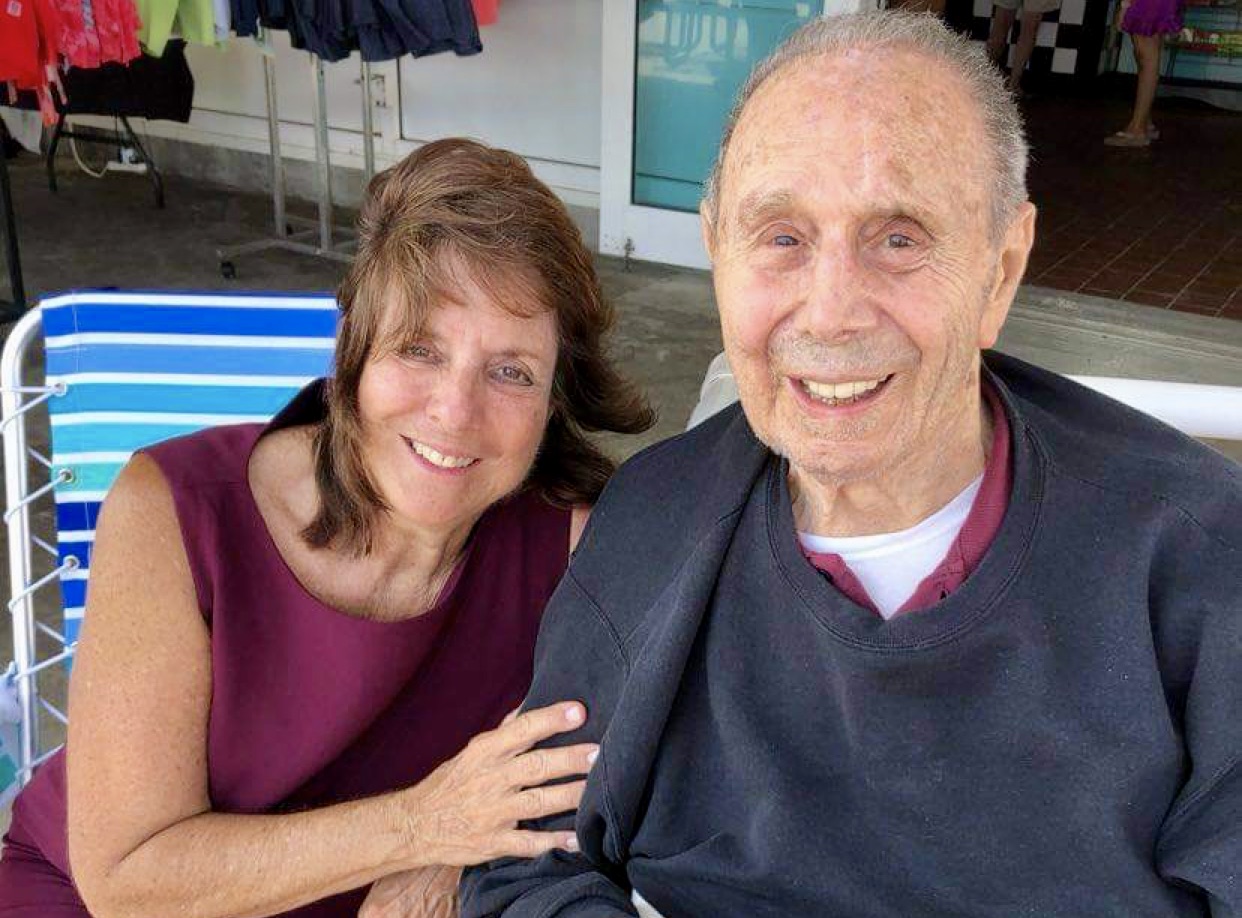 If your heart has felt the soft-rock lyrics of Dan Fogelberg’s song “Leader of the Band” you have a sense for Patricia DeRosa Padden’s commitment to honoring her 99 year old dad’s legacy. To hear her sing his praises is to listen to a love story. Her phrasing is poetic, the kind of stuff that brings tears to your eyes. She feels her dad is an icon. Once you hear her story, you may feel that way too. In so many ways Pat DeRosa of Montauk, New York is every Baby-Boomer’s dad, a sterling example of by-gone American pride and a National treasure.

The rhythm of Pat DeRosa’s life is lyrical.  An Army aptitude test discovered his phenomenal capacity to sequence Morse code. According to his daughter, Pat casually attributed the previously unknown skill-set to his ability to play the saxophone. The serendipitous remark lead to an audition to try-out for the famous ‘Glenn Miller’s Army Air Force Band’. DeRosa spent his WWII tour of duty from 1943-1946  “In The Mood” to entertain troops around the United States. 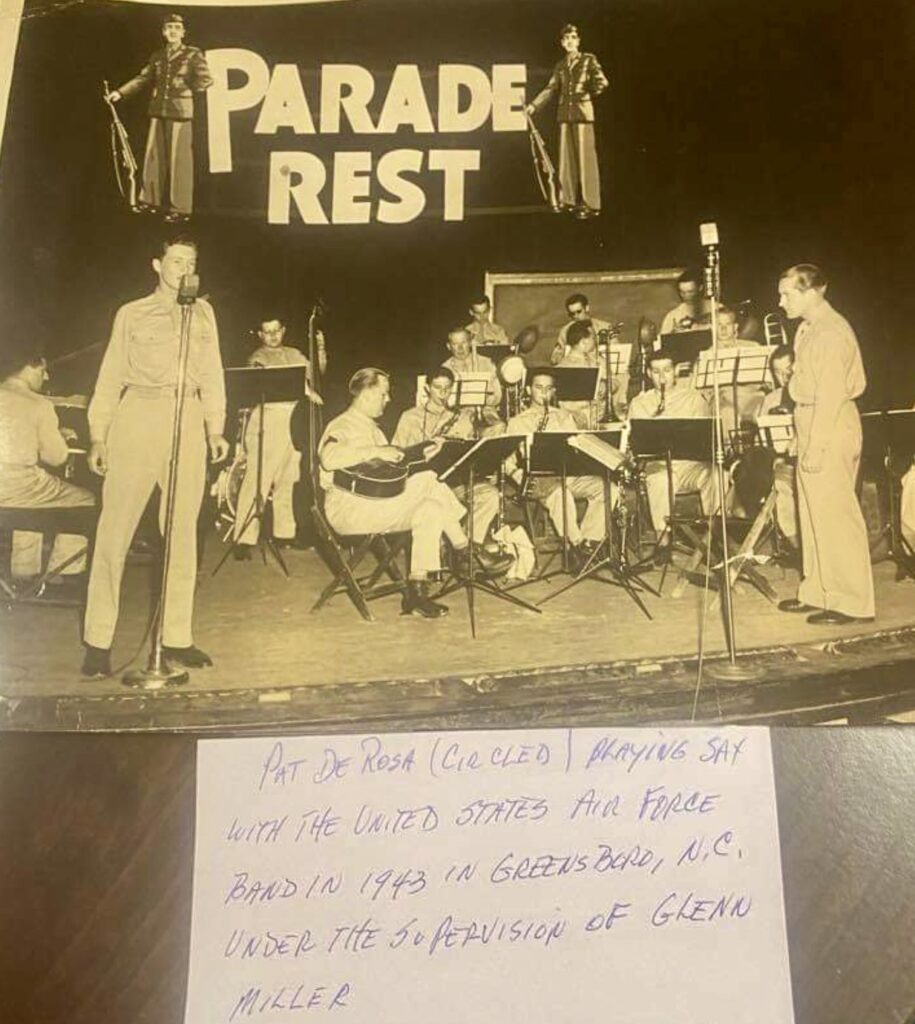 The ‘Big-Band’ sound remained DeRosa’s passion and was the hottest musical craze for Boomers returning from war. However for DeRosa, the bright lights and swagger of celebrity-life couldn’t match the simple comforts of an All-American family home. The Veteran coupled his talents with opportunities of the GI-Bill and converted them into a Master’s level teaching degree. Marrying Constance, a pretty nurse with a tender heart, Pat DeRosa happily settled into life as a junior high school music teacher. For decades his God given abilities wowed the New York wedding and party circuit. 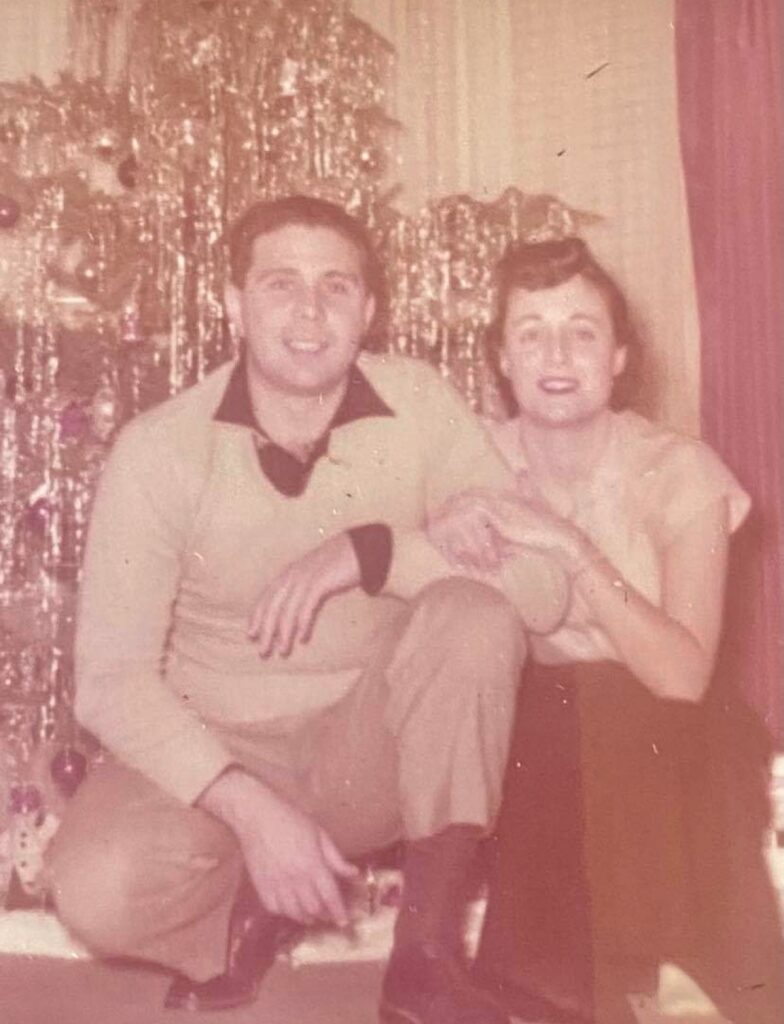 Pat and Constance DeRosa Christmas circa 1950

Patrica describes her childhood home as idyllic; filled with mom’s funny personality, dad’s charismatic ways and lots and lot’s of music.  Everyone from former students to John Coltrane, and Harry Chapin’s dad, Jim, jammed in the magic of the DeRosa basement garage-band. Surrounded by sounds she loved Patricia shed adolescent shyness to back-up the Big-Banders.  Syncopation lead her and her daughter, Nicole DeRosa Padden, to follow the beat of their favorite Band Leader’s groove to become a second and third generation of teachers who also perform together as vocalists and multi-talented instrumentalists. 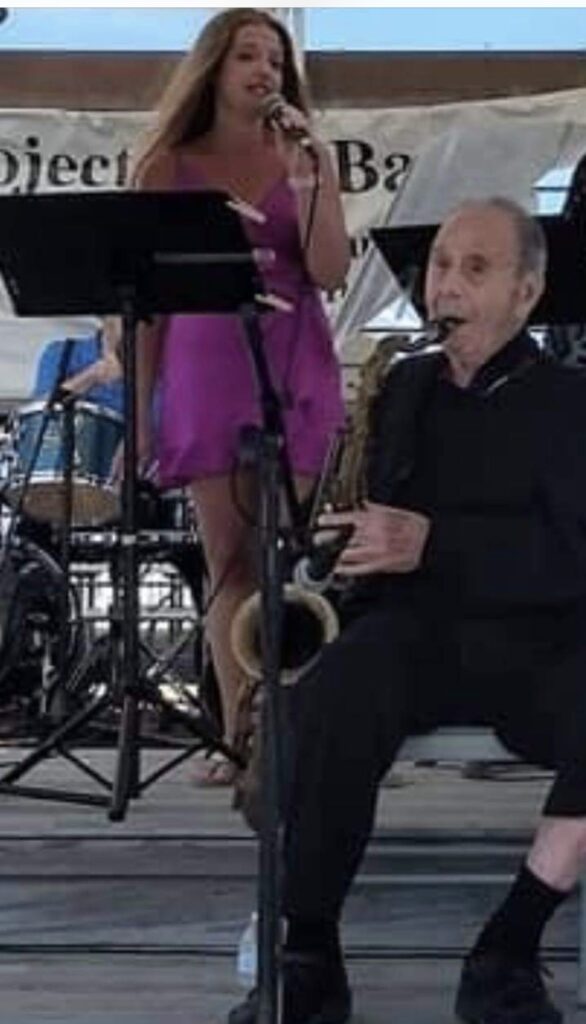 Constance the pretty nurse, with the tender heart and funny personality passed away in 2009. An unfamiliar quiet settled into the family.

Determined to spark her dad’s soul, Patrica channeled her energies, and his, into performing at the old venues that brought joy to thousands of fans. As she said ” People love to hear him play and he deserves to realize how much happiness he’s brought to peoples lives.”

Unlimited by genre Pat DeRosa is back to wowing fans. Six years ago he sat-in with Billy Joel’s band-mate Mike DelGuidice and his Big Shot Band playing  “Just the Way You Are” at the Paramount Theater in Huntington, N.Y.  The gigs continue for the saxophone player who recently performed at a concert organized by Project 9 Line to benefit Veterans. 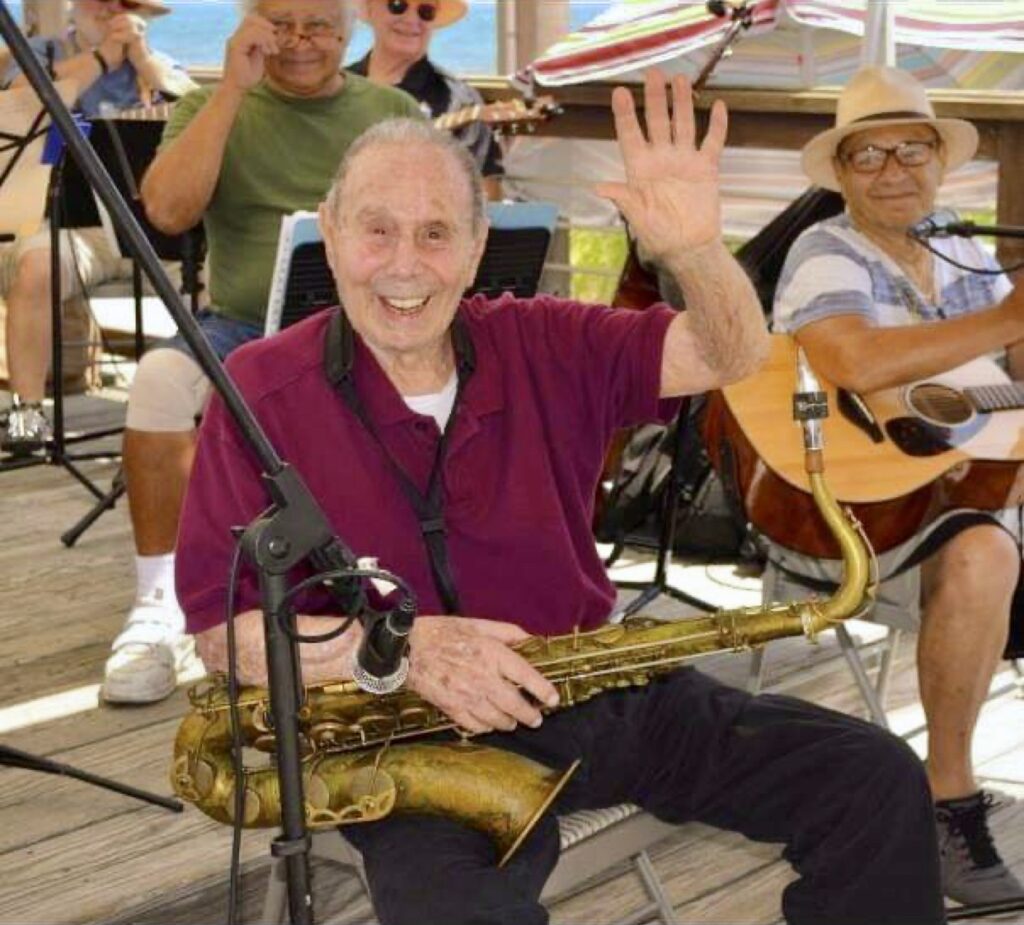 On December 6th, 2021 Pat DeRosa will turn 100. No longer the leader of his band he’s content to back-up Big-leaguers with the same charisma he’s always had.  Proudly he loves his country, his family and his life. According to his daughter he’s humbled to share the joy that fill his days with memories but, if he has one more wish to make it’s to back-up today’s Big-Bander, Billy Joel, a man he feels is king of today’s musical stage.

In 1982 Dan Fogelberg’s “Leader of the Band” topped the Adult Contemporary chart. The chords of it’s humanity echo like the DeRosa family soundtrack. It was written as a tribute for Fogelberg’s dad Lawrence when his days were short. But any Boomer who loved their dad feels each verse. When Patricia quotes it’s heartfelt lyrics her tears flow with bittersweet memories.

“The leader of the band is tired,

And his eyes are growing old,

But his blood runs through my instrument

And his song is in my soul

My life has been a poor attempt,

To imitate the man,

To the leader of the band.” 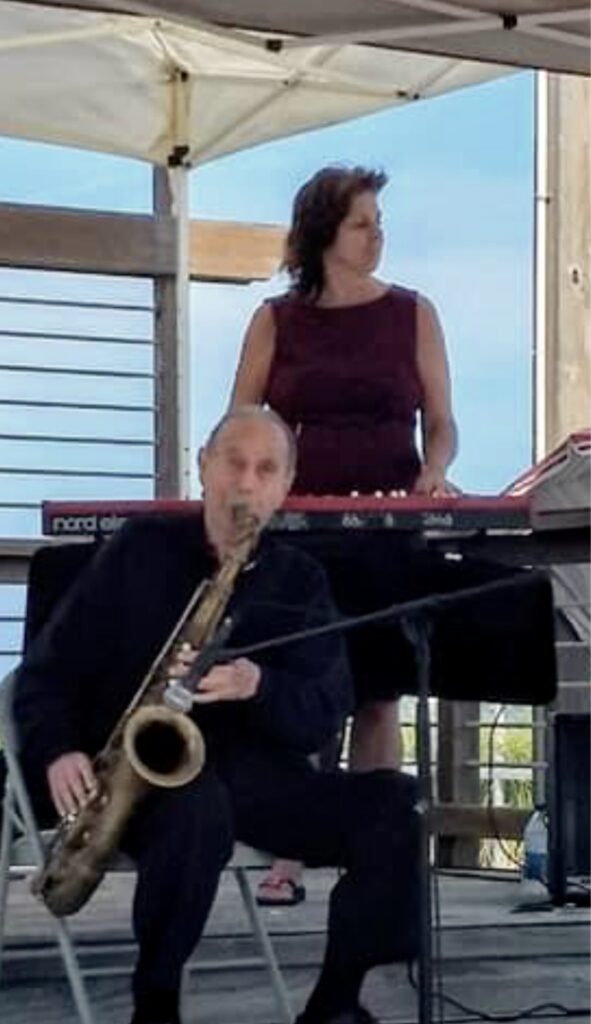 Patricia DeRosa Padden backs up her Long Island Hall of Fame dad, Pat DeRosa as he swings into his 100th birthday,,, like a rock star!

“I thank you for the music

And your stories of the road,

I thank you for the freedom, When it came my time to go–

I thank you for the kindness,

And the times when you got tough,

Pat DeRosa’s talent, work-ethic and style are symbols of by-gone American pride and he is a National Treasure. He’s also been recognized this year by Guinness Book of World Records as the ‘Oldest Professional Player’