Take a Giant Step Outside Your Mind with Ethan Murrow at the Cahoon Museum! 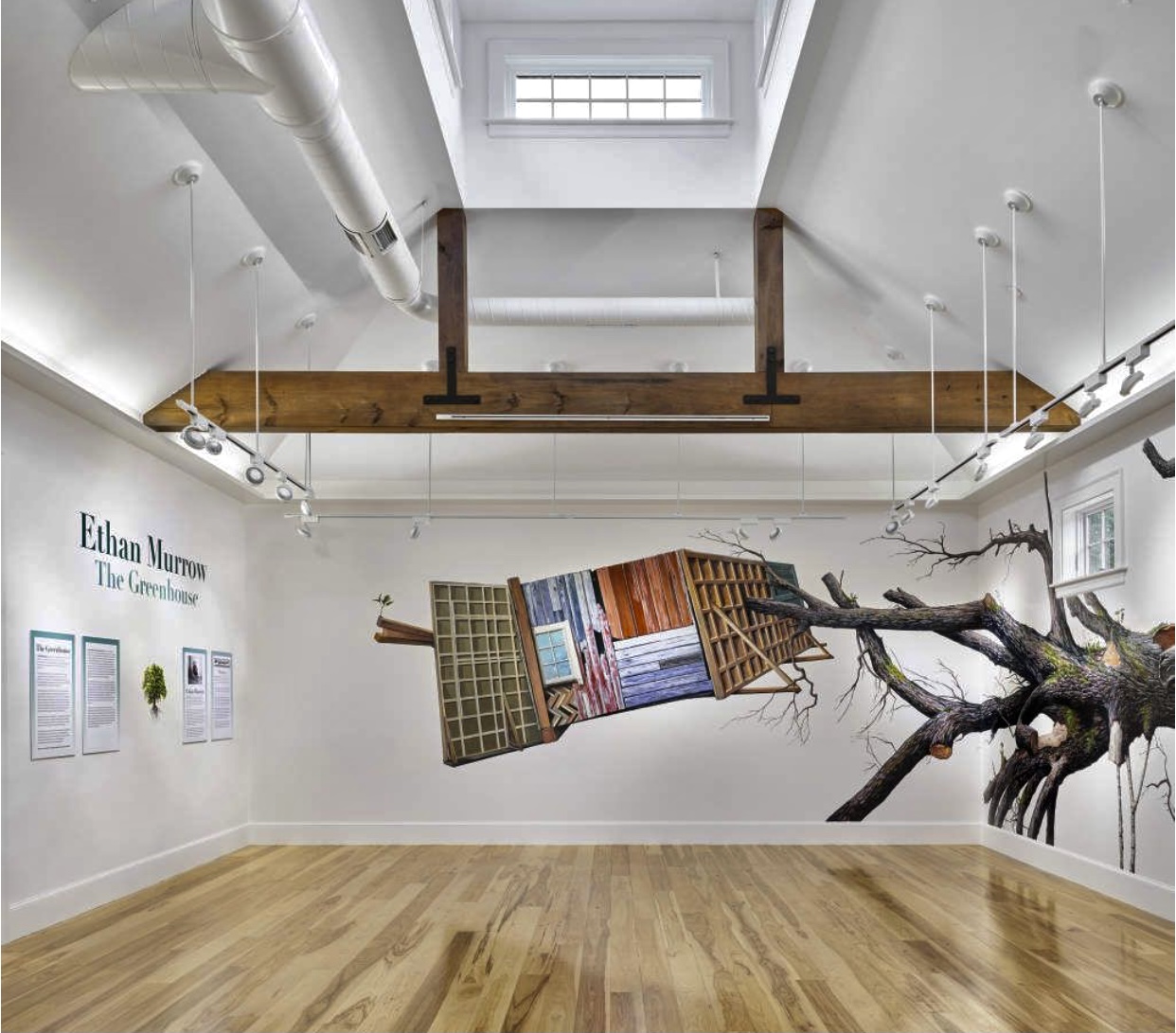 Inside a little Cape Cod art gallery is an extraordinary painting of an ordinary oak by Ethan Murrow, a mighty talented guy.  The decaying tree and the imagined energy that surrounds it are a modern-day riff on Heraclitus’ philosophy “All is flux. Nothing stays still.” Unlike the ancient Greek’s melancholic mindset, Murrow’s ‘Greenhouse’ philosophy is an acrylic ode to ‘change’ saturated with a colorful sense of optimism ~ and lots of fun. It’s a wonder to be seen!

Murrow’s talents are monumental. Follow his work and he’ll help you take a giant step outside your mind. Grab a gab with the prolific guy and you’ll find his dedication to philosophical-art is a serious trip.

‘The Greenhouse ‘ is a temporal example of the contemporary artist’s expansive sense of the world. Site specific, this collaborative project is a synthesis of thought, a fusion of genres, and an enormous step away from a traditional look at maritime life on Cape Cod.  The presence of a rotting oak tree, a makeshift support system, and a fanciful treehouse inside a museum, offers visitors of all ages a grand invitation to imagine a tour through the entwined lifecycles of vegetation, Indigenous peoples and thousands of years of human disruption. By intention, the felled oak is more than artful, it’s thought provoking.  And, it’s thriving in an atmosphere of open-ended conversations at the Cahoon Museum in Cotuit, Massachusetts. 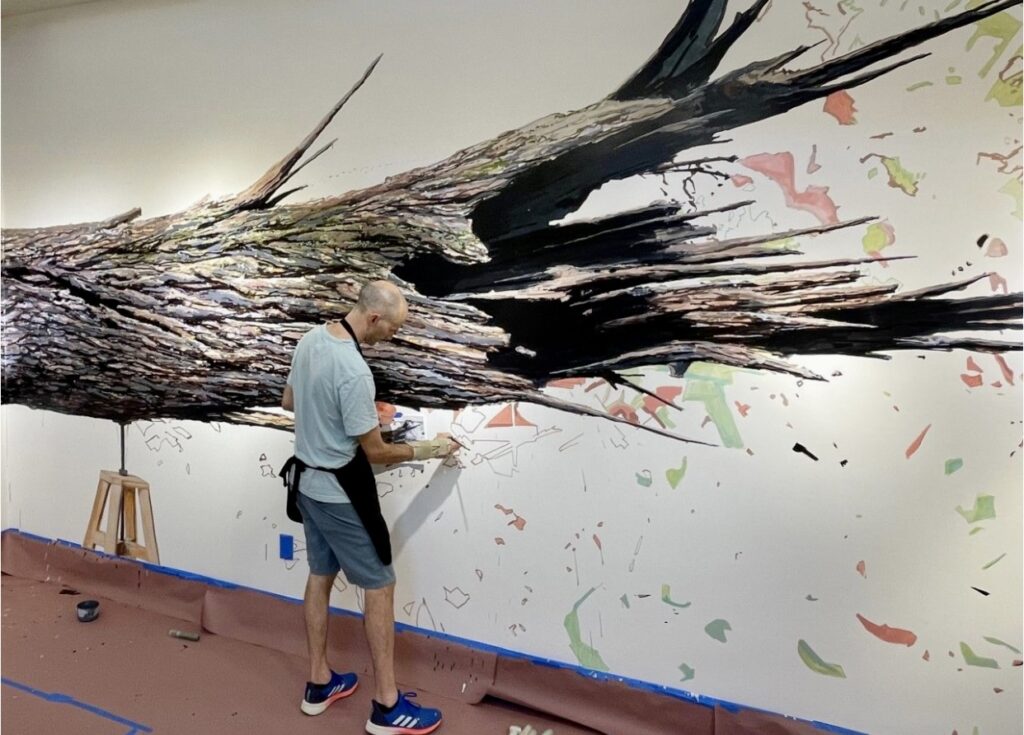 Ethan Murrow at the Cahoon Museum, installing The Greenhouse

The allegorical eco-system of  ‘The Greenhouse’ sprouted in Murrow’s fertile imagination and will live at the Cahoon until October 3rd.  Balancing the obvious with the unknowable, this narration of metamorphosis, like many of Murrow’s artistic statements, includes a sizable element of farce in fatality. Murrow said, “When the installation is painted-over to make way for something new, it will become another recess of Cape Cod history.”  He and his assistants embrace the transient nature of their work just as comedians, dancers and rock stars do at the end of a show. 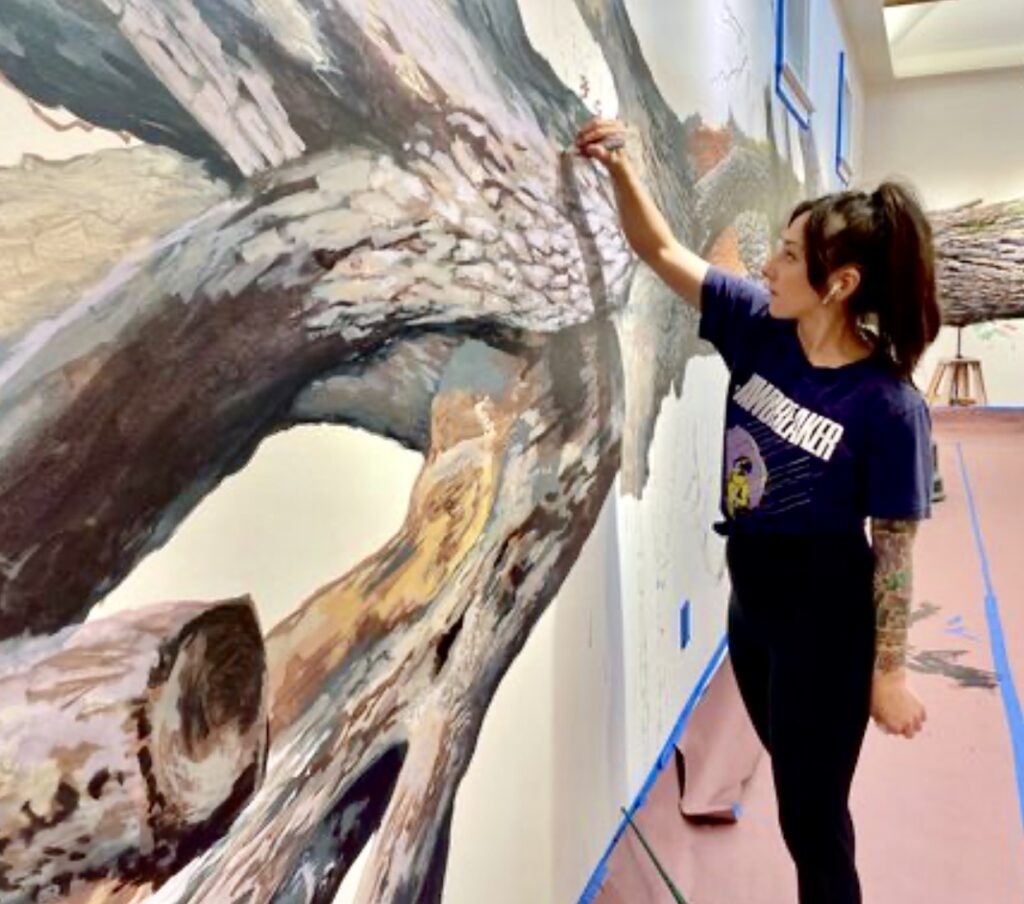 A talented Murrow assistant installing “The Greenhouse” at the Cahoon

Raised by two school teachers, Ethan Murrow grew up on a Vermont farm surrounded by Romeny sheep, goats and pigs. He imagined an absurdly adventurous life beyond the agrarian landscape. To escape a sense of claustrophobia, he created and starred in home-movies often with heroic themes filled with satire.  Today, he believes the liberating scale of many of his works is in direct contrast to the sense of isolation he felt as a kid. 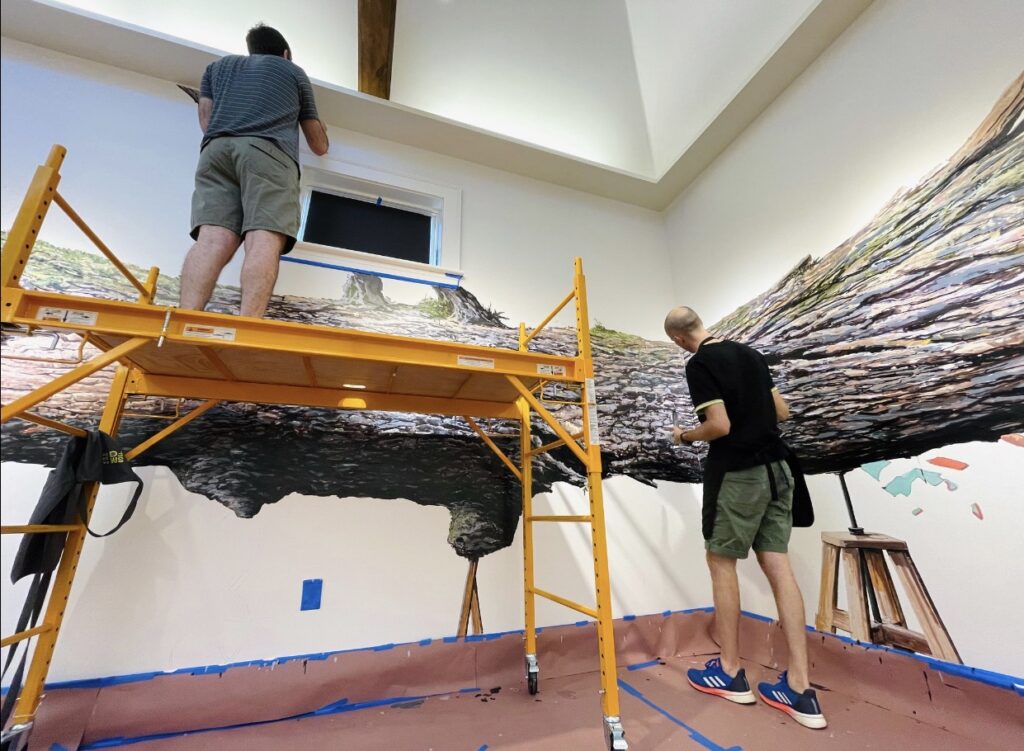 Murrow’s super-sized work-ethic correlates with the ethos of his journalist and war correspondent grandfather, Edward R. Murrow. In addition to earning positions as a Fellow at the Ballinglen Foundation in Ireland, and a rotation as an “Artist in Residence”  at Facebook, galleries in Paris, New York, Seattle and Los Angeles have been commercial platforms for Ethan Murrow’s philosophical take on nature’s ebbs and flows. Inspired by the every-day, ambient music and mass consumption of Audible mysteries, Murrow’s life is filled with responsibilities as an artist, author, Professor at the Museum of Fine Arts School at Tufts, his marriage and dad-patrol. The confluence has produced a business-like atmosphere in his non-stop, multi-medium studio where he and a team of prodigious assistants riff on life through a hybridized lens. 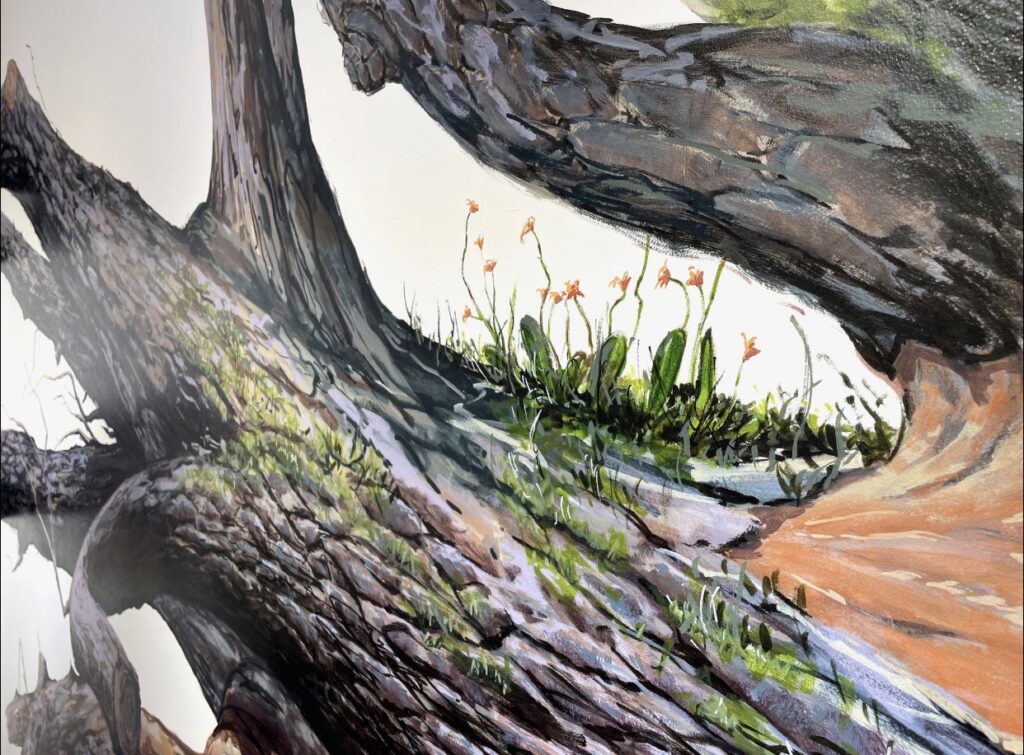 “The Greenhouse’ by Ethan Murrow :  A visual riff on nature’s transient dynamic

Take a giant step outside your mind and catch ‘The Greenhouse’ now through October 3rd at the Cahoon Museum.

Ethan Murrow will share a behind the scenes gallery chat about his 75 foot installation with Museum visitors and Michael MacMahon, Cahoon Museum Education and Programs Manager August, 4th at 1:00 PM.

A Virtual Zoom chat will be held  August 5th @ 7:00 PM;  registration is required.

Ethan Murrow and his wife Vita are the authors of :