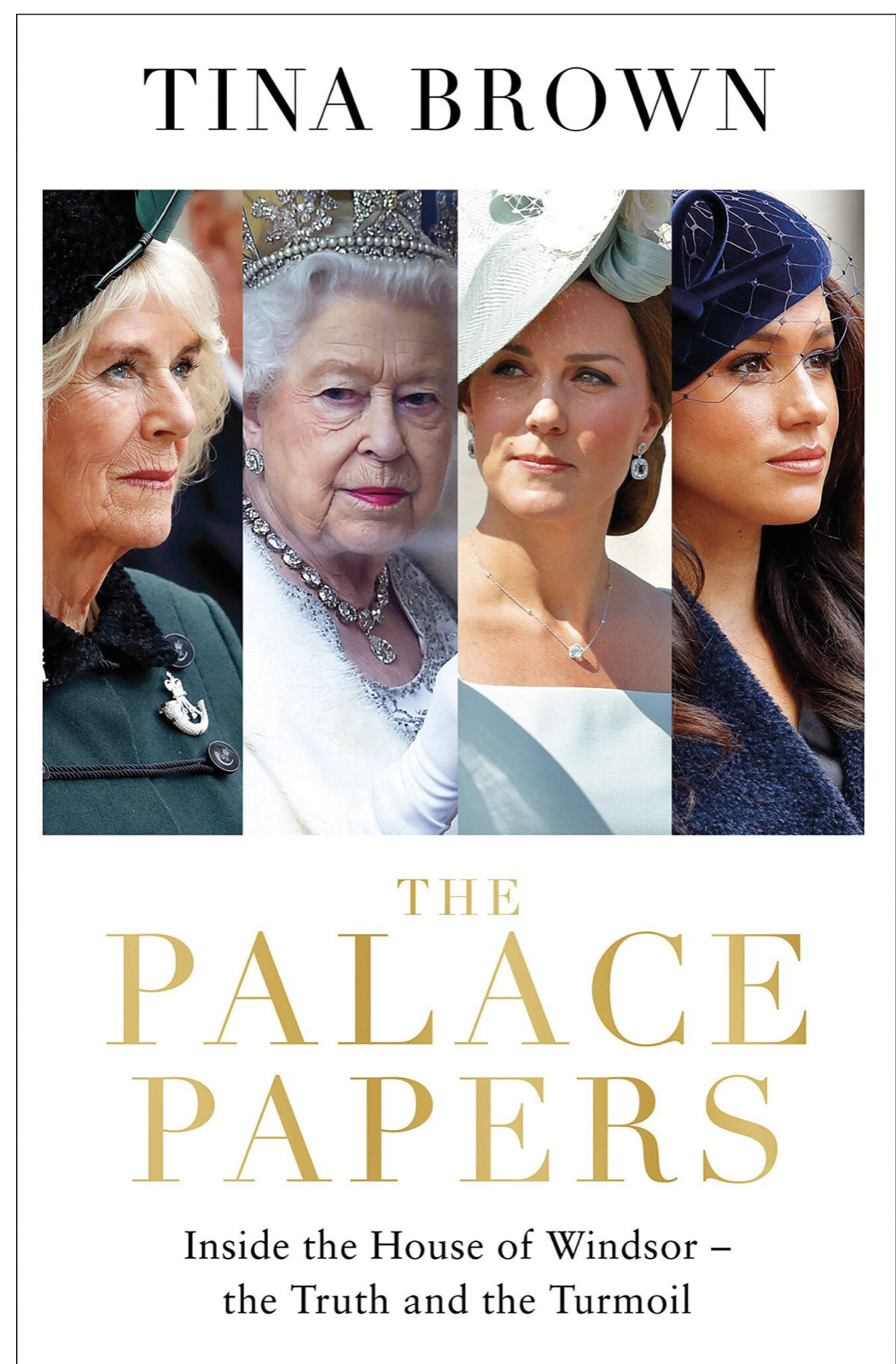 “Chin-Up Princess or the Tiara Slips” is a fake-it-till-you-make-it kinda clichè.

The ditty summarizes “The Palace Papers”, Tina Brown’s 500 page take on current-life behind Buckingham Palace walls. The saying is a glittery reminder to keep the facade flawless, or risk destroying a perpetual inheritance of diamond tiaras ~ and more.  ‘Papers’  makes it clear, when it comes to enjoying perks of the Palace, reality simply isn’t as relevant as keeping up appearances.

All Royal photos: credit The Palace Papers by Tina Brown

Before writing books that tattle, Ms. Brown was the Editor-in-Chief of Tatler, Vanity Fair, and the New Yorker, she’s also the founder of The Daily Beast.  In 2000, for her service to journalism, the happy-to-hustle literary-lady was awarded the title of CBE, (Commander of the British Empire) by Queen Elizabeth II. The polished writer became a Lady.

Ten years after Princess Di’s death, Brown authored the #1 New York Times best seller ‘The Diana Chronicles’ in 2007..  Just released, ‘The Palace Papers’ continues Brown’s less-spark, more-snark look at Royal existence. In the past twenty years, the Lady, has given Her Majesty countless opportunities to practice her royal chin-up, in order to spare the tiara du-jour. These days, the Lady’s polish tarnishes the Royals.

‘ Papers’ is a chronicle of the pains and privileges of entitled-titled ones. This time the text is focused on Camilla, Queen Elizabeth, Kate Middleton and Meghan Markle. Brown’s stories fit together tenuously, with ancestral sub-plots. British prose fashions a traditionally regal stance that has served the Empire’s appearance of dignity for centuries. However, as stories emerge, a pattern of destabilized equilibrium is the modern-day reality.  The Castles, Cottages, Lodges, and Palaces are repositories of in-bred petulance.

Chin-up has been the public posture of imposters who successfully fake the sparkle of their tiaras as a reflection of intellectual and social wattage.  ‘ Papers’ contends, ‘It simply ain’t so.’  Like the jewels they wear, light refracts from those who fill their sphere of influence with worthy causes, but their greater cause is to worry most about personal Palace privileges.

Brown, captures quirks of the the royal-register with panache and punchy percussion.  Queen Elizabeth appears in this book to be adept at bifurcating her role between Majesty and Mummy. However, when there’s malice at Buckingham Palace the Queen tends to hide behind protocols until the Monarchy nears ruin or the storm passes. 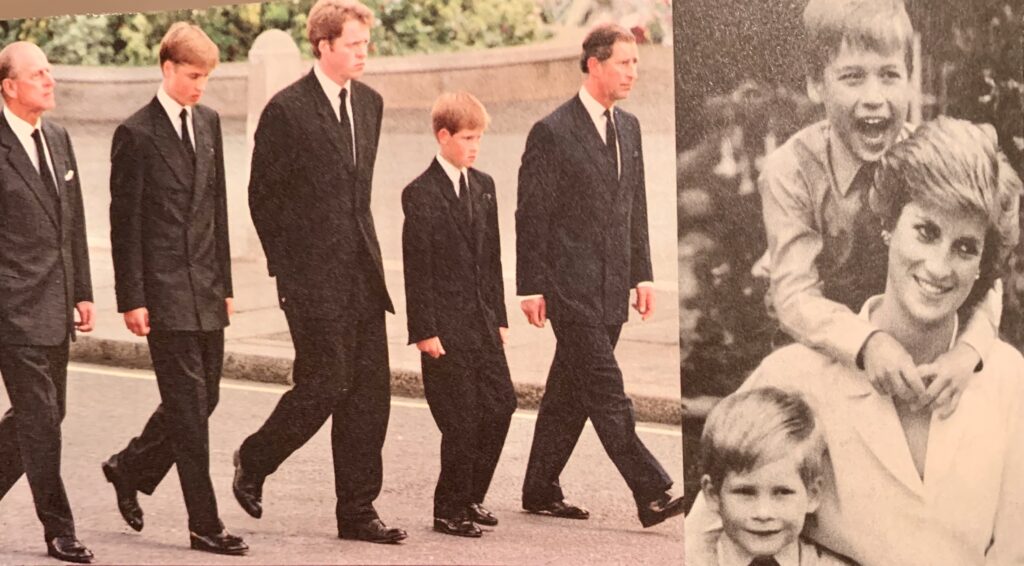 In ‘Papers‘  a sketchy outline of a trash-talking Camilla Parker Bowles is saturated like a tampon string with her life-long lust to have polo-playing men in bed. The inconvenient spirit of Diana, floats between Camilla’s royal hunting-holidays and boozy-snoozy render-vous with Prince Charles.  Her persona, in public, is of quiet consort to the future King of England, in private Camilla’s hands mold the intensions of the frequently-pouty Prince Charles. 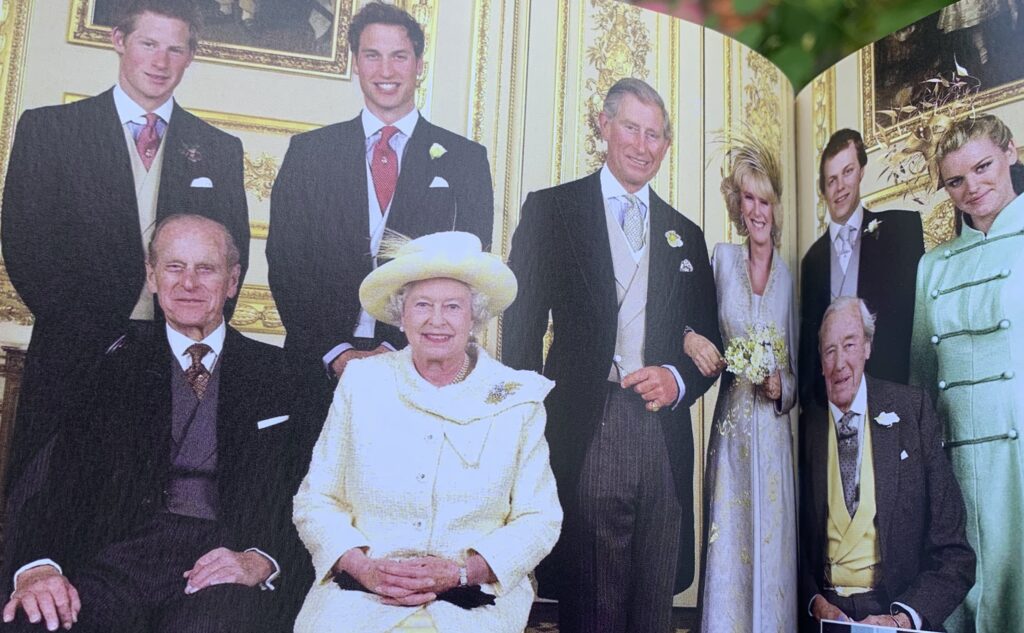 Following her mother’s script for “How to Reel-In-A-Royal”, Kate Middleton transforms effortlessly from a provocative co-ed into a dignified Duchess. 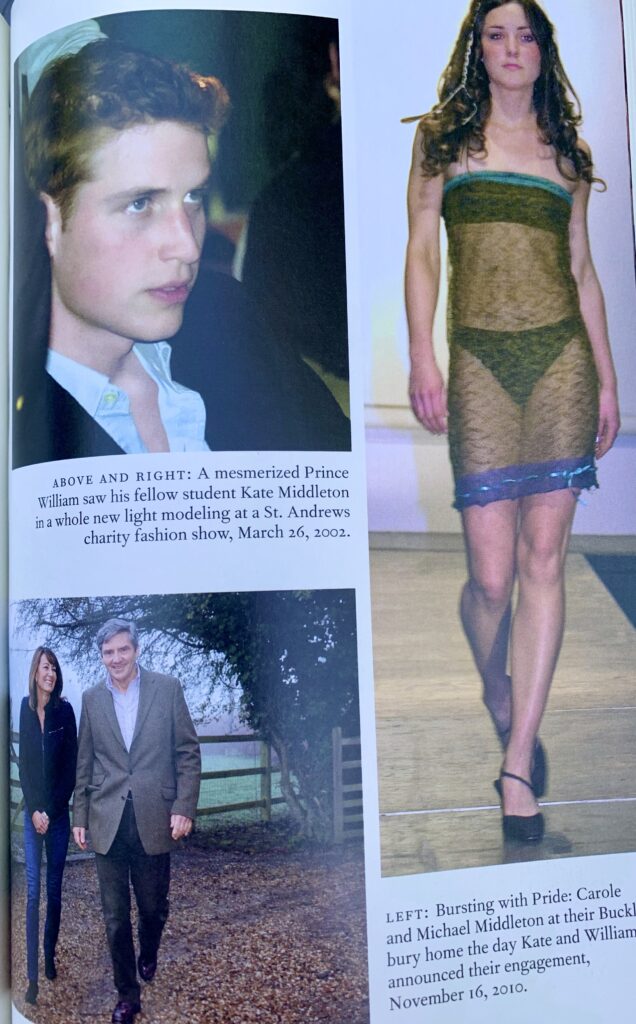 After marrying William, the Duke of Cambridge, Kate became capable of cat-walking the tight-rope of family-foibles in taboo’ed espadrilles as easily as she does in stiletto’d Manolos. Poised-under-pressure, Kate dismissed the diss of Castle-commotion that arrived when Harry met Meghan 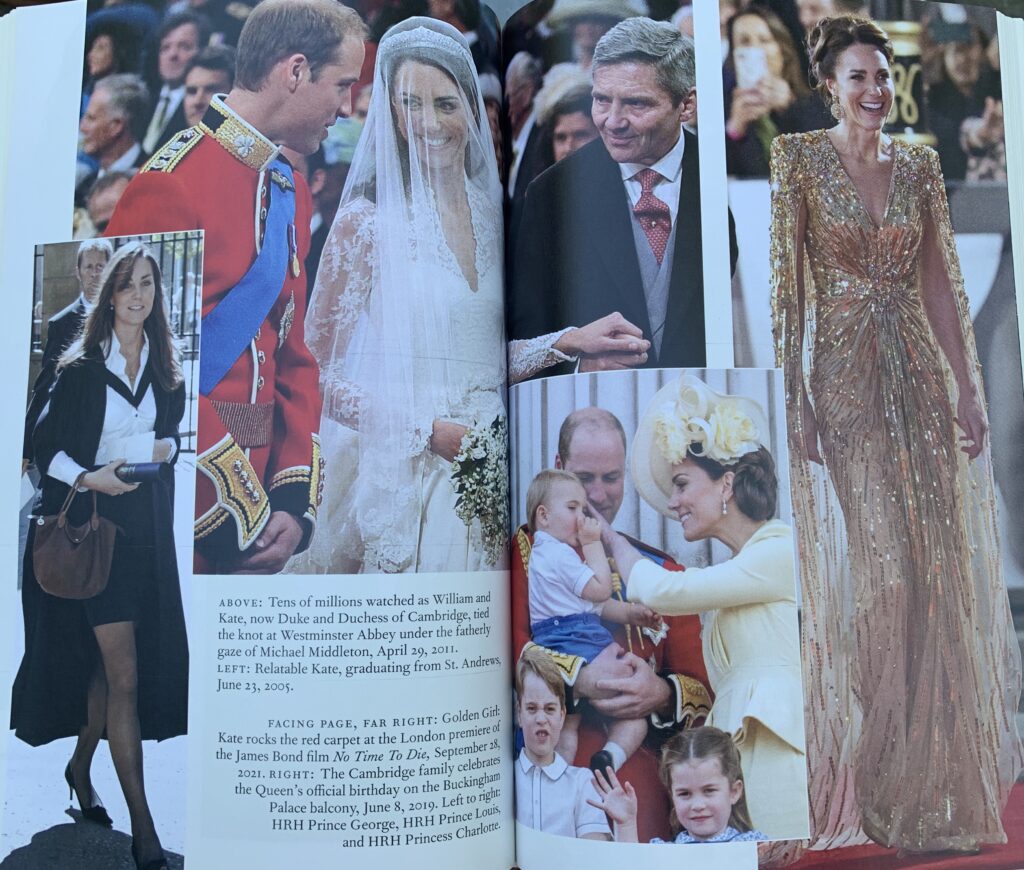 Lady Brown introduces readers to Meghan Markle in the land-of gentry, as a gal who believes in the nobility of her social-climb. Hob-nobbing is one of Markle’s most practiced arts. As an actress on the D-level television series, Suits, the ambitious beauty marketed her trade-mark sparkle internationally by using Piers Morgan’s connections. After capturing the heart of Harry, the Duke of Sussex, Meghan began to envision a new world order where the two could generate global good-will and a gigantic self-serving revenue stream ~ if only the Queen could see things their way. 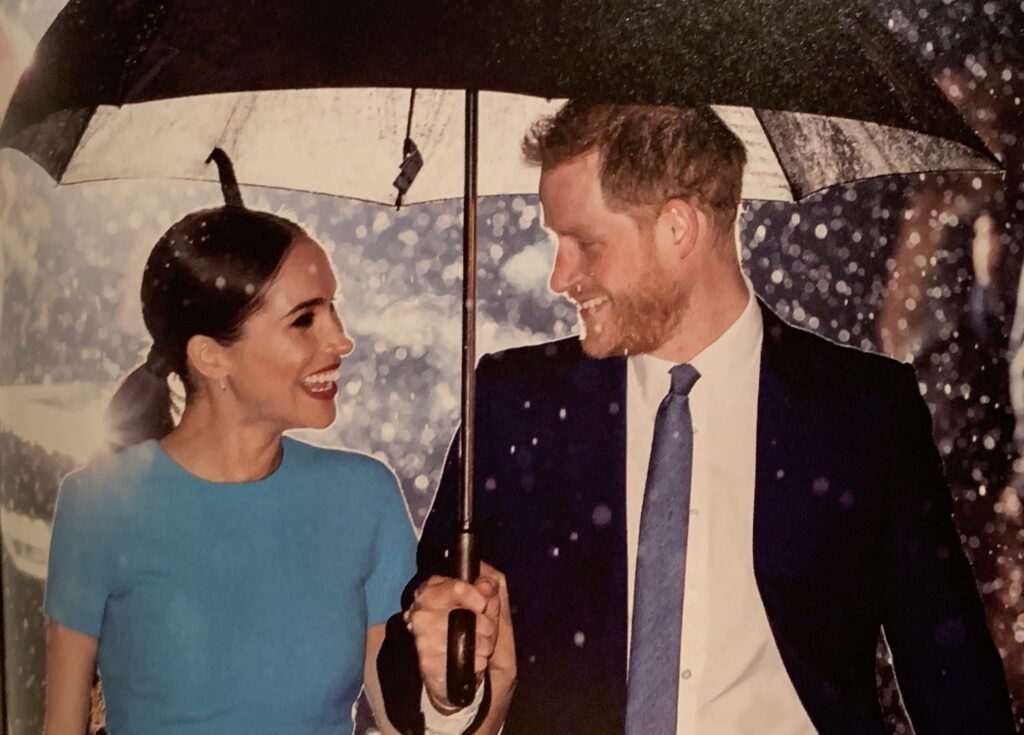 Frustrated by the confinement of keeping her chin-up, Meghan let her tiara and title slip in a way that resembled the other ill-suited suitor of fame and tax-payer-funded fortune, Wallis Simpson.

Detail driven Tina Brown’s ‘The Palace Papers’  peers beyond head-lines into the head-space of those who live opulently trivial lives. Content to whine about secrets being spilled, hush money being paid and an obligation to protect blood-lines, the Royals near their twilight of relevance. If they are to remain more than a tourist attraction they need to remember to fake the joy of royal appearances before their reality slips into history. Social-media is ubiquitous and unforgiving. It will be increasingly more challenging to pose with the perfect posture required to justify a lifestyle that is as out-of-style as a closet filled with ill-fitting Suits.

If ‘The Palace Papers’ fit into your beach-bag, don’t be surprised if reading it makes you question the values of this family of fortune. 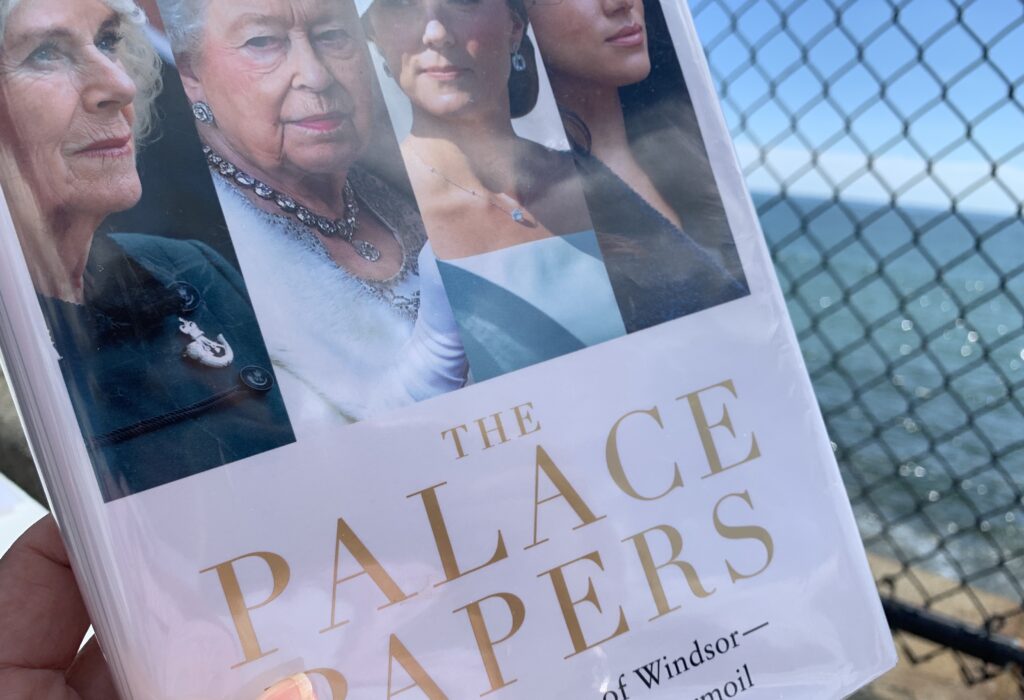 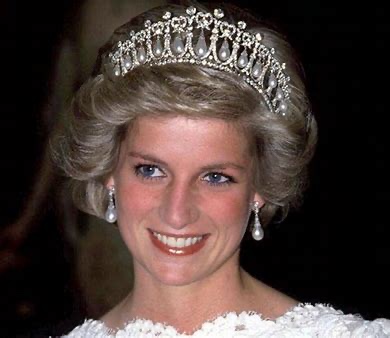