“The Triumph of Nancy Reagan” by WaPo’s Karen Tumulty is a Chronicle of Contempt. 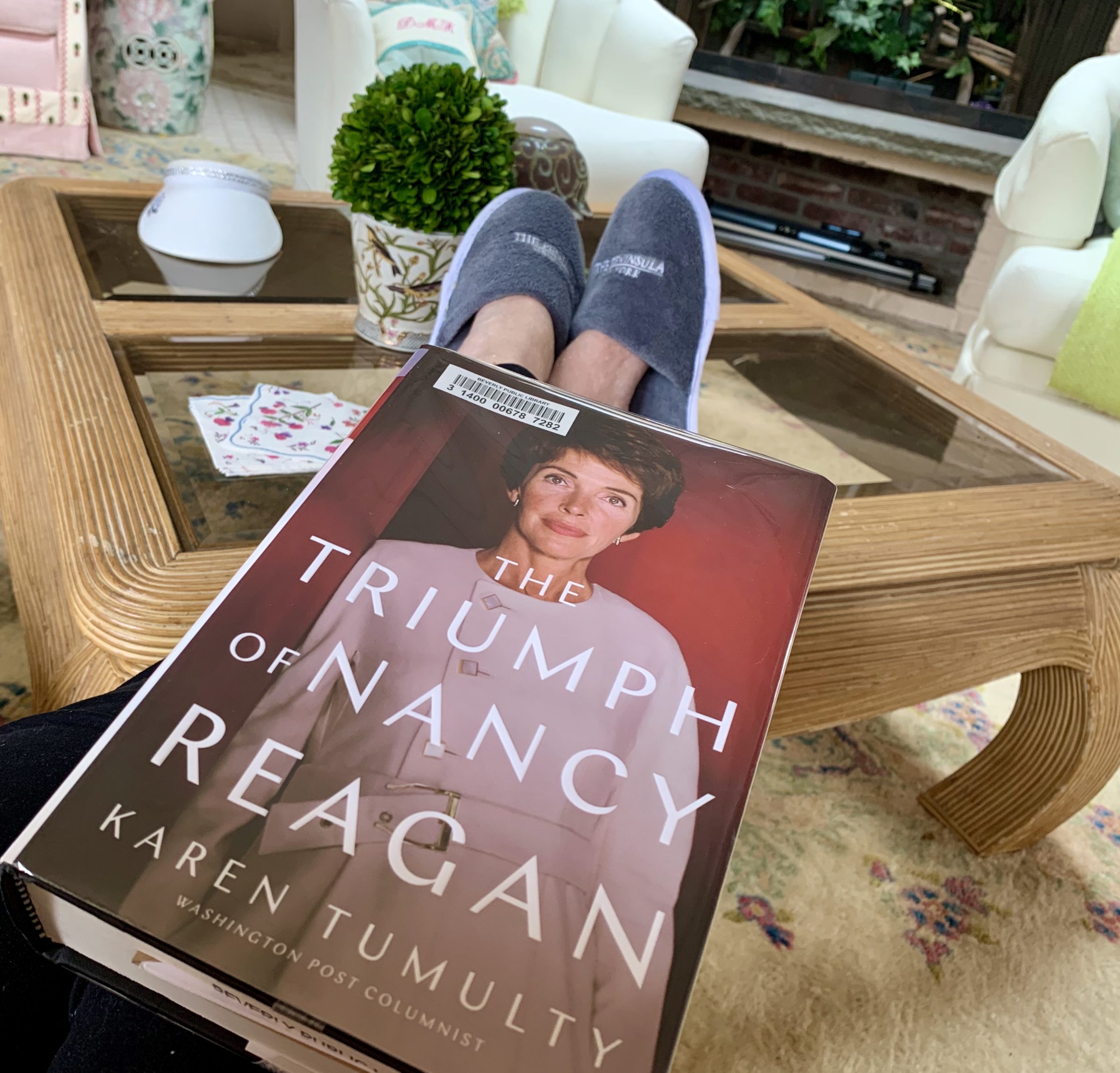 Simon & Schuster claims “The Triumph of Nancy Reagan” is the definitive biography of the former First Lady. The publisher says that because  their editorial director, Priscilla Painton, recruited Washington Post political columnist, Karen Tumulty, to write this 662 page chronicle of political contempt. WaPo is known to advance a decidedly partisan agenda.  Their goal to rewrite history flows throughout their paper, and not coincidentally, on every page of this book. Before settling into “Triumph”, readers may want to consider the sources involved in this ‘bio-hit’, and anticipate the spin on “definitive” history.

With the precision of a marksman and the talents of a political operative, Karen Tumulty doesn’t miss an opportunity to portray her subject as a uniquely vapid woman, void of all but one redemptive quality. The author’s literary skill and attention to detail carries the story of Nancy Davis ~ ‘Hollywood Wanna-Be’ to Nancy Reagan ~ ‘Heart-broken Washington Widow’. 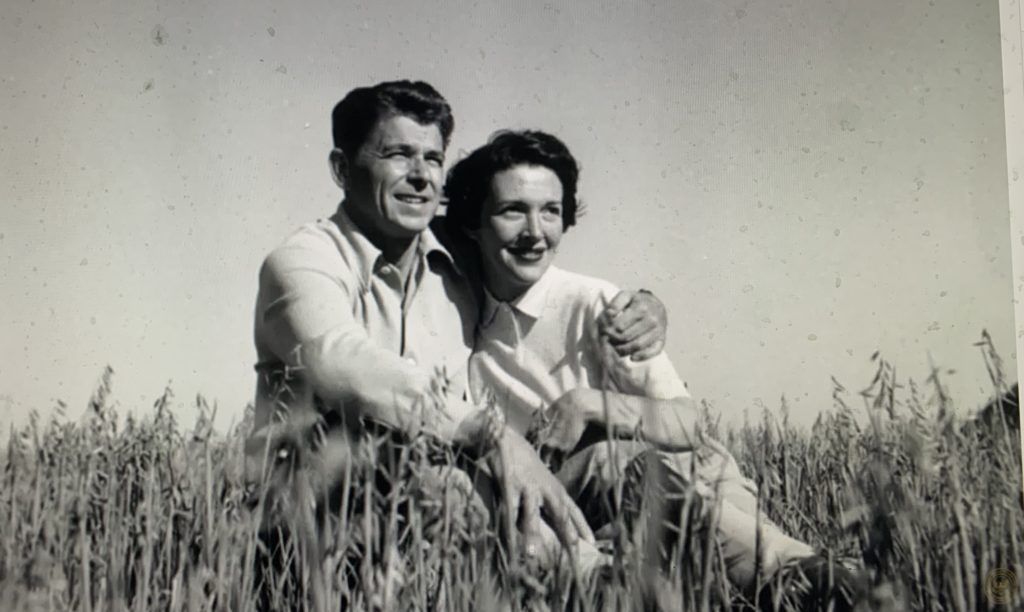 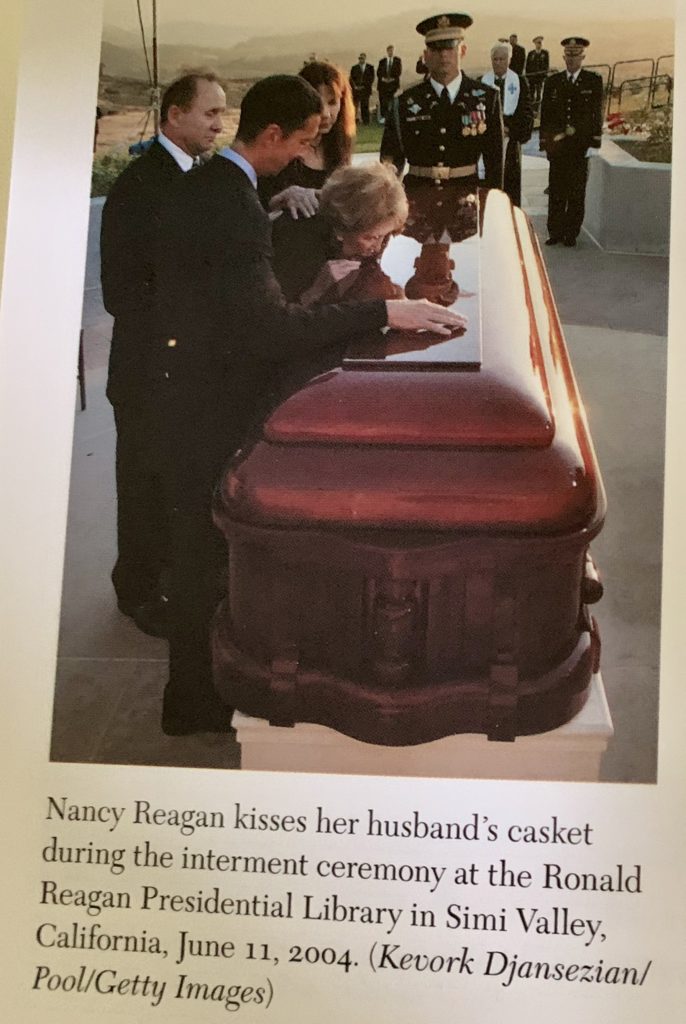 The book begins by outlining Nancy’s habit of calculating the value of the acquaintances. Childhood abandonment, limited income and a desire for social-cachè set her on a lifelong course of anxieties and a determination to build a lasting legacy.

As written, a more applicable title for “The Triumph of Nancy Reagan” would have been ” Conniving in Couture”. The critical premise of “Triumph” features Nancy dressed beyond her means, parading through life as a modern-day Lady Macbeth.  To believe the interpretations of this tandem publishing team would be to believe the greatest triumph of Nancy Reagan’s life was to finish her husband’s Imperial term in office and avoid an unceremonious departure from 1600 Pennsylvania Ave. 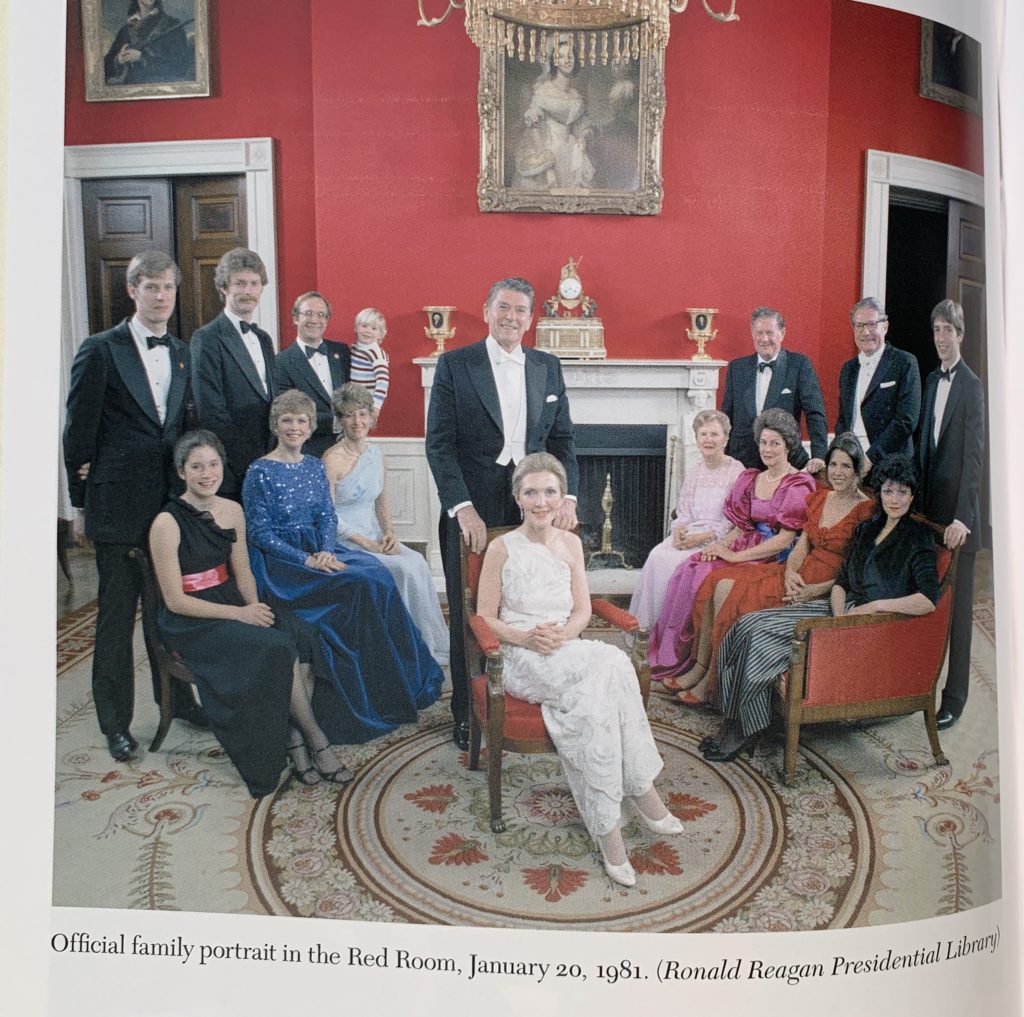 “Triumph” limits the legacy of the former First Lady to a vain, pill-popping, manipulative flirt who’s shot-gun wedding enabled her to neglect her children, intimidate grown men and secretly control the world in a size two ‘free-be’ Adolfo suit. Tumulty’s take on Nancy is; when the ambassador of American arrogance wasn’t consumed with status seeking she was obsessively focused on her husband’s next opportunistic move.

The biography characterizes Nancy’ as neurotic claiming she was unreasonable with other First Ladies, squabbled with Raisa Gorbachev for sport and labeled her adult children as flawed appendages of her marriage.   The author’s research implies constant consultations with a San Franciscan astrologer shaped the Reagan Administration, but did little to calm the anorexic, over-medicated, face-lifted spokesperson for the  ” Just Say No” drug-campaign. 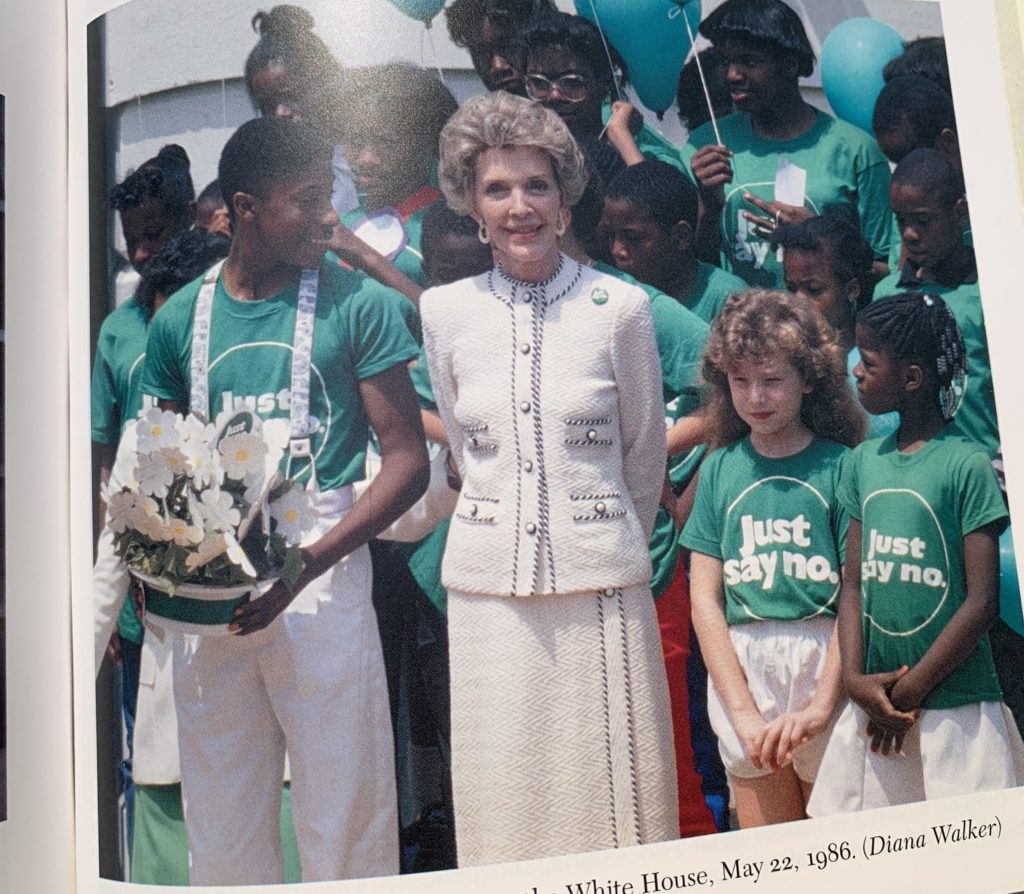 According to Tumulty’s sources, Nancy’s favorite past-times included crying poor, cultivating Betsy Bloomingdale and romancing Frank Sinatra. The author says Washington-insiders commonly referred to Mrs. Reagan as ‘Queen Nancy’ or ‘The Dragon Lady’ and claims it was the dictating diva of the White House who set the irrational pace and places for Executive meetings.  In short, much like the Washington Post, Karen Tumulty’s ‘just not that into the Reagans.’

In this chronicle of contempt, the accomplishments of Ronald Reagan’s administration are over shadowed by petty controversies and snap shot poll numbers. No mention is made of President Reagan’s popularity soaring after President Carter’s directives were abandoned. Nor does the author acknowledge Reagan’s leadership lowered interest rates, erased staggering inflation, ended gas station lines and eased geo-political tensions.

Notably, throughout “Triumph’  Tumulty replaces President’s Reagan’s title with ‘Ronnie’. The spousal term of endearment is a vehicle for the author’s disrespect and serves to highlight Nancy Davis Reagan’s sole redemptive quality; she loved her husband. 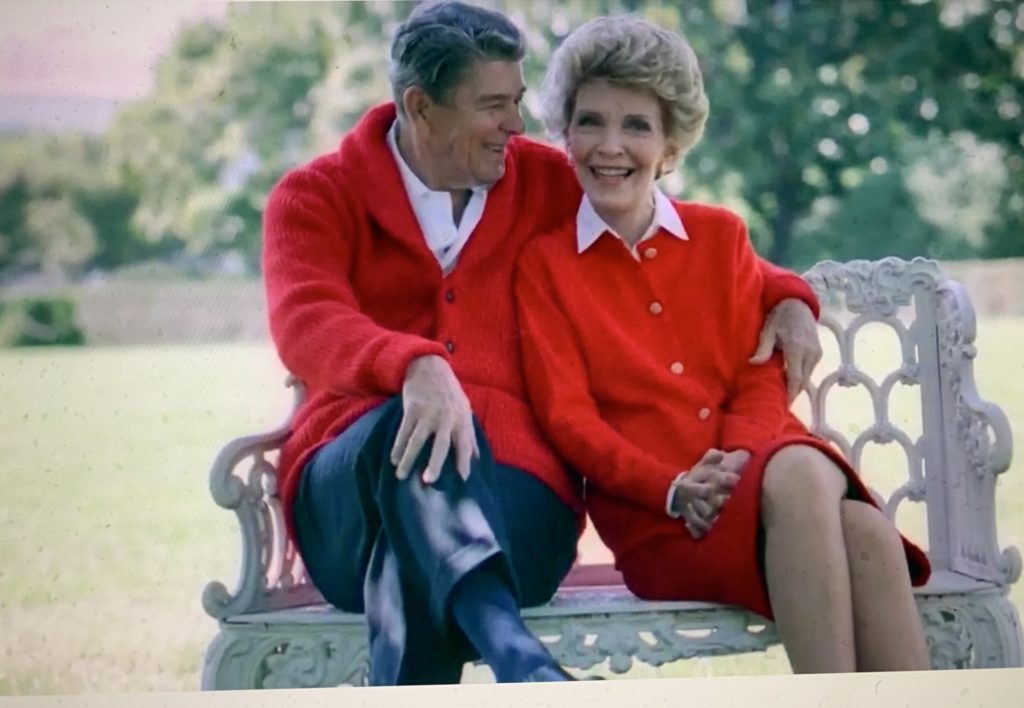 From beginning to end this Simon and Schuster publication portrays the President as a broken man. At first, he is a young divorcé, Hollywood wash-out, arriving for a date with Nancy on crutches. In mid-life he’s an emotionally detached TV pitch-man with superficial intellectual capacity. Eventually, the ‘great communicator’s’ ability to communicate was erased by the ravages of Alzheimer’s disease. Reagan became a man lost in familiar places and confused by familiar faces. The President was crippled, and his wife was his final crutch. 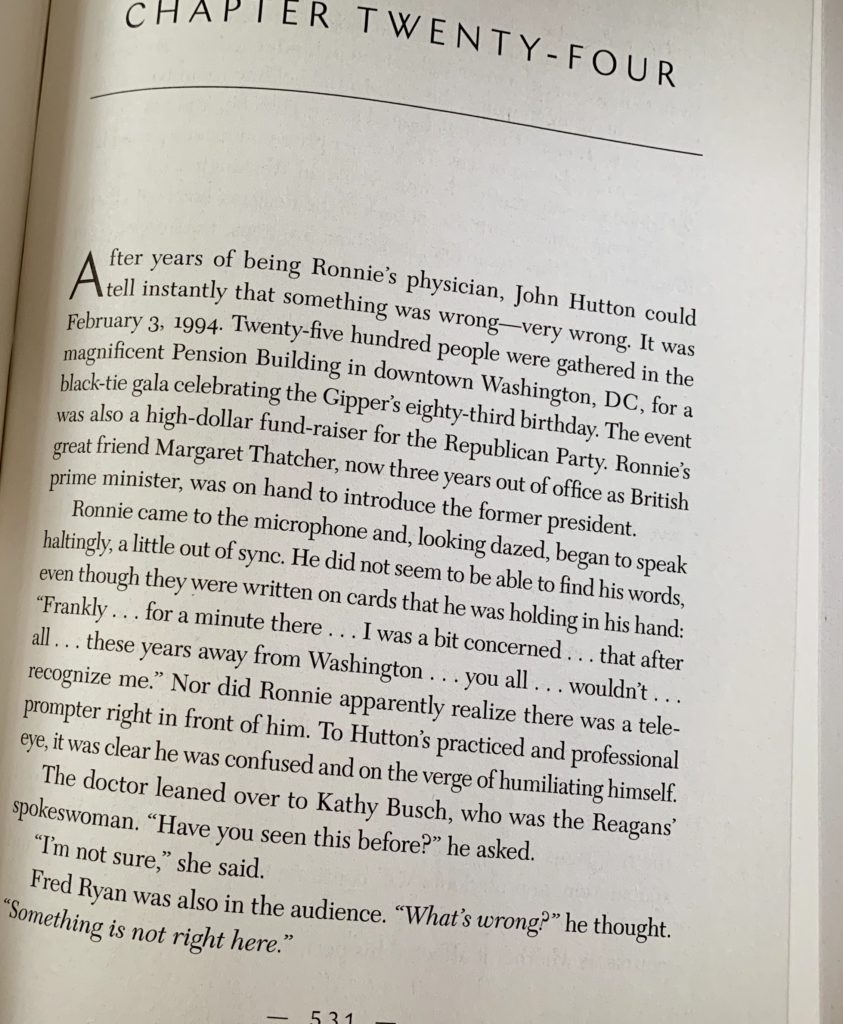 Tumulty’s nuanced timeline implies President Reagan was genetically predisposed to Alzheimer’s disease and signs of dementia were evident during his tenure. Nancy’s hyper-vigilant management of his schedule, staff and public appearances were intended to preserve his dignified legacy while embellishing her own. This so called ‘definitive biography of the First Lady’ explains in minutia how Nancy Reagan protected her “Ronnie” through difficult emotional exchanges, family humiliations  and the assassination attempt.

Reading ” The Triumph of Nancy Reagan” may not fully characterize the accomplishments of this complicated First Lady, but it is an ironic reminder that history repeats it’s self. Eerily, the documented behaviors look remarkably similar to those of hyper-vigilant First Lady,Dr. Jill Biden.